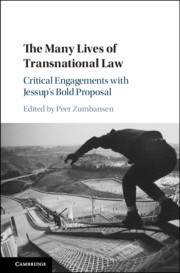 In 1956, ICJ judge Philip Jessup highlighted the gaps between private and public international law and the need to adapt the law to border-crossing problems. Today, sixty years later, we still ask what role transnational law can play in a deeply divided, post-colonial world, where multinationals hold more power and more assets than many nation states. In searching for suitable answers to pressing legal problems such as climate change law, security, poverty and inequality, questions of representation, enforcement, accountability and legitimacy become newly entangled. As public and private, domestic and international actors compete for regulatory authority, spaces for political legitimacy have become fragmented and the state's exclusivist claim to be law's harbinger and place of origin under attack. Against this background, transnational law emerges as a conceptual framework and method laboratory for a critical reflection on the forms, fora and processes of law making and law contestation today.