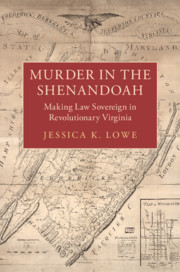 
On July 4, 1791, the fifteenth anniversary of American Independence, John Crane, a descendant of prominent Virginian families, killed his neighbor's harvest worker. Murder in the Shenandoah traces the story of this early murder case as it entangled powerful Virginians and addressed the question that everyone in the state was heatedly debating: what would it mean to have equality before the law - and a world where 'law is king'? By retelling the story of the case, called Commonwealth v. Crane, through the eyes of its witnesses, families, fighters, victims, judges, and juries, Jessica K. Lowe reveals how revolutionary debates about justice gripped the new nation, transforming ideas about law, punishment, and popular government.

Jessica K. Lowe teaches at the University of Virginia, School of Law.

Introduction
1. The facts of the fight
2. The making of a republican judge
3. Examination: class, procedure, and local courts in Crane's Virginia
4. The Bloody Code and the logic of legal reform
5. Indictment: power shifts and power continuities in Virginia's courts
6. Crane's trial and its 'imperfect' verdict
7. 'That stigma on my character': judges, judicial review, and 'republican' interpretation of the laws
8. Murder or manslaughter? Crane's special verdict at the general court
9. Pardon request: mercy and Crane's 'lunatic fits'
Conclusion

More information is available with the publisher.