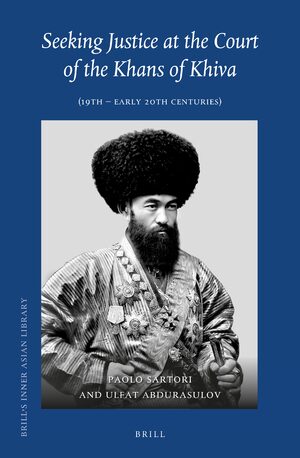 Brill is publishing a new book on the legal history of the Khanate of Khiva.

This book aims to shed light on the juridical field of the Khanate of Khiva at the end of the 19th and the beginning of the 20th century. The 'Khanate of Khiva' is the term employed in Western historiography to denote the political formation that was put in place by the Qonghrats. The latter was a dynasty of Uzbek origin that ruled roughly between the last quarter of the 18th century and 1920. It ruled over the region known as Khorezm (Ar. Khwarazm), one of the biggest oases of Central Asia, traversed by the Amu Darya and nestled within the territory of what is today Uzbekistan, Kazakhstan, and Turkmenistan.

The main objective of this work is to show that prior to Sovietization the dispensation of justice in Khorezm depended mostly on a group of officials who represented the dynasty in power, but who lacked any specialised legal training.

It is important to reflect on this particular aspect of the legal system developed by the Muslim principality that we refer to as 'the Khanate of Khiva,' for conventional wisdom says that the practice of law in pre-modern Muslim societies was usually the business of the 'ulama', i.e., the scholars of Islam.

Paolo Sartori, Ph.D. (2006), University of Rome ‘la Sapienza’ is Senior Fellow at the Austrian Academy of Sciences. He is the author of Visions of Justice: Sharīʿa and Cultural Change in Russian Central Asia (Brill, 2016) and is the Editor-in-Chief of the Journal of the Economic and Social History of the Orient.

Ulfat Abdurasulov, Ph.D. (2009), History Institute, Tashkent, is Senior Fellow at the Austrian Academy of Sciences. A recipient of many grants, he published in many scientific journals such as Iranian Studies, Ab Imperio,Eurasian Studies, Islamic Law and Society, and Der Islam.