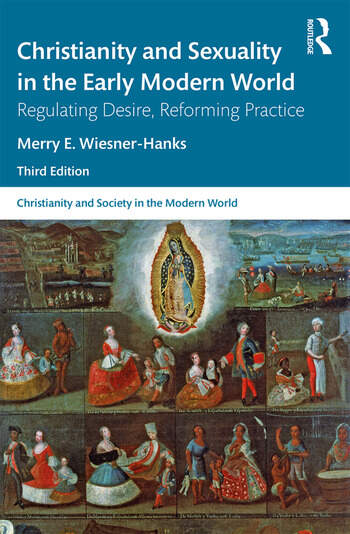 Routledge is publishing a new edition of Christianity and Sexuality in the Early Modern World.

Christianity and Sexuality in the Early Modern World surveys the ways in which people from the time of Luther and Columbus to that of Thomas Jefferson used Christian ideas and institutions to regulate and shape sexual norms and conduct, and examines the impact of their efforts.

Global in scope and geographic in organization, the book contains chapters on Protestant, Catholic, and Orthodox Europe, Latin America and the Caribbean, Africa and Asia, and North America. It explores key topics, including marriage and divorce, fornication and illegitimacy, clerical sexuality, same-sex relations, witchcraft and love magic, moral crimes, and interracial relationships. The book sets its findings within the context of many historical fields, including the history of gender and sexuality, and of colonialism and race.

Each chapter in this third edition has been updated to reflect new scholarship, particularly on the actual lived experience of people around the world. This has resulted in expanded coverage of nearly every issue, including notions of the body and of honor, gendered religious symbols, religious and racial intermarriage, sexual and gender fluidity, the process of conversion, the interweaving of racial identity and religious ideologies, and the role of Indigenous and enslaved people in shaping Christian traditions and practices. It is ideal for students of the history of sexuality, early modern Christianity, and early modern gender.

Merry E. Wiesner-Hanks is Distinguished Professor of History Emerita at the University of Wisconsin-Milwaukee, USA. The senior editor of the Sixteenth Century Journal, she is author or editor of thirty books and many articles that have appeared in English, German, French, Italian, Spanish, Portuguese, Greek, Chinese, Turkish, and Korean.