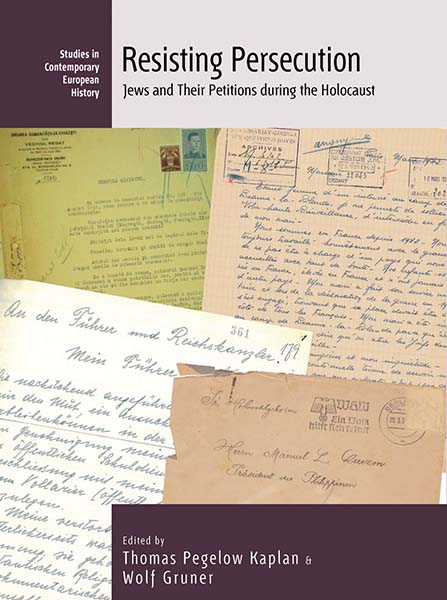 Berghahn books is publishing a book on petitions by Jewish people during the Holocaust.

Since antiquity, European Jewish diaspora communities have used formal appeals to secular and religious authorities to secure favors or protection. Such petitioning took on particular significance in modern dictatorships, often as the only tool left for voicing political opposition. During the Holocaust, tens of thousands of European Jews turned to individual and collective petitions in the face of state-sponsored violence. This volume offers the first extensive analysis of petitions authored by Jews in nations ruled by the Nazis and their allies. It demonstrates their underappreciated value as a historical source and reveals the many attempts of European Jews to resist intensifying persecution and actively struggle for survival.

Thomas Pegelow Kaplan is the Leon Levine Distinguished Professor and Director of the Center for Judaic, Holocaust, and Peace Studies at Appalachian State University. He is the author of The Language of Nazi Genocide (2009) and the co-editor of Beyond ‘Ordinary Men’: Christopher R. Browning and Holocaust Historiography (2019).

Wolf Gruner is the Shapell-Guerin Chair in Jewish Studies, Professor of History and Founding Director of the USC Shoah Foundation Center for Advanced Genocide Research at the University of Southern California. He is the author of nine books on the Holocaust, including Jewish Forced Labor under the Nazis (2006) and the prize-winning The Holocaust in Bohemia and Moravia (English edition 2019, German original 2016).

List of Illustrations
Acknowledgments
Introduction
Thomas Pegelow Kaplan and Wolf Gruner
Chapter 1. To Not “Live as a Pariah”: Jewish Petitions as Individual and Collective Protest in the Greater German Reich
Wolf Gruner
Chapter 2. “Did We Not Shed Our Blood for France?” Identity and Resistance in Entreaties for the Jewish Internees of Occupied France, 1940–44
Stacy Renee Veeder
Chapter 3. Honorary Czechs and Germans: Petitions for Aryan Status in the Nazi Protectorate of Bohemia and Moravia
Benjamin Frommer
Chapter 4. Legal Resistance through Petitions during the Holocaust: The Strategies of Romanian Jewish Leader Wilhelm Filderman, 1940–44
Stefan C. Ionescu
Chapter 5. Attempts to Take Action In a Coerced Community? Petitions to the Jewish Council in the Lodz Ghetto during World War II
Svenja Bethke
Chapter 6. Petitioning Matters: Jews and Non-Jews Negotiating Ghettoization in Budapest, 1944
Tim Cole
Chapter 7. Global Jewish Petitioning and the Reconsideration of Spatial Analysis in Holocaust Historiography: The Case of Rescue in the Philippines
Thomas Pegelow Kaplan
Chapter 8. Petitioning for “Equal Treatment”: The Struggles of Intermarried Holocaust Survivors in Postwar Germany
Maximilian Strnad
Conclusion
Thomas Pegelow Kaplan and Wolf Gruner
Appendix: European-Jewish Petitions during the Holocaust
Bibliograhpy
Index