As some of you already know, the ESCLH has now also a Facebook page. Become a "fan" of the ESCLH on Facebook and keep in touch with the community of comparative legal historians around the world. We need your help to create an effective network!
Posted by Dr. Stefania Gialdroni at 2:24 PM No comments: 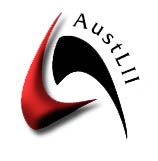 Australasia has a rich and complex legal history since the first European settlement, and our knowledge of legal practice and precedent in the colonies of Australasia is still developing. The Australasian Colonial Legal History Library project is an ARC-funded project being carried out by the Australasian Legal Information Institute (AustLII) since January 2012 with input from 18 legal historians from Universities across Australia. Cooperation with other parties who have already built invaluable and pioneering online resources for Australasian colonial law is an essential part of the project.

AustLII is a free access online service which has operated since 1995 as a joint facility provided by UNSW and UTS Law Faculties , and now provides over 500 databases, with usage of over 700,000 page accesses per day. The Colonial Legal History Library project is therefore being built within a large and mature research infrastructure, and this presents challenges as well as advantages. In particular, many of the AustLII databases cover the whole period from the formation of a colony to the present, so the databases for this Library have to be ‘virtual’ databases extracted from this larger corpus.

The paper explains the construction, content and features of the first version of the Library, which as of July 2012 contains 12 databases including one case law database from each of the seven colonies (including New Zealand), some of which are ‘recovered’ cases from newspaper reports, the complete annual legislation to 1900 from three of the colonies, plus legal scholarship concerning the colonial era. These databases provide over 20,000 documents so far, and the Victorian Government Gazette 1851-1900 another 200,000. The Library also includes the LawCite citator, which allows the subsequent citation history of any colonial case to be tracked, including if cited by courts outside Australasia.

The medium term aim of this part of the ARC project (which extends to 1950 in its full scope) is to include all legislation, reported cases, and cases which can be ‘recovered’, from the inception of each colony to 1900. Scholarship (old and new) and key source materials are also being added, as budgets permit. We hope that the Library will be a leader in the creation of legal history resources from the colonial era.

Posted by Dr. Stefania Gialdroni at 3:14 PM No comments:

CALL FOR PAPERS: Journal of History and Cultures

The Journal of History and Cultures (JHAC) is issuing a Call for Papers for the next issue and welcomes articles on subjects in the fields of history and cultures within a broad geographic and chronological range. We are also accepting book reviews.
JHAC is a peer-reviewed journal and an excellent new publishing opportunity both for postgraduates and established academics. Articles should be 5,000-7,000 words in length. We encourage articles that consider and engage with historical, cultural, political, social, and theoretical research in new and original ways. Reviews should be 750-1,000 words in length. Review essays should be in-depth engagements with recent books which develop an argument to complement the reading of the text. A list of books available for review will be appearing on our website; alternatively, you can contact our reviews editor directly to request a specific book to review at jhac@contacts.bham.ac.uk.
The deadline for submissions is 1st October 2012.
Full submission and formatting guidelines can be found at: http://historyandcultures.com/submissions/
Finally, we invite you to join the JHAC community on both Facebook and Twitter @UOBJHAC for regular updates.
We are offering a £50 prize for the best article.

Please email all submissions and address any enquiries to jhac@contacts.bham.ac.uk.
Posted by Dr. Stefania Gialdroni at 8:51 AM No comments:

Email ThisBlogThis!Share to TwitterShare to FacebookShare to Pinterest
Labels: Call for papers, History

The Institute Lucernarius of the University of Lucerne (Switzerland) organizes the 39th Day of Legal Historians (Rechtshistorikertag). It will take place from the 2nd to the 6th of September 2012, for the fourth time in Switzerland and for the first time in Lucerne. The plenary opening session will begin on the 2nd of Sepember at 5:00 pm with an address by prof. Peter von Matt. More information about the program, which includes, as a novelty, a poster-session, are available here (papers in German and in English).
Posted by Dr. Stefania Gialdroni at 10:52 AM No comments:

The 2012 Society of Historians of the Early American Republic's Annual Conference starts today in Baltimore, Maryland. For more information see: http://legalhistoryblog.blogspot.it/2012/07/legal-history-at-shear.html
Posted by Dr. Stefania Gialdroni at 3:24 PM No comments:

One week ago, the ESCLH Second Biennial Conference on "Legal History: Definitions and Challenges" took place at the VU University Amsterdam (9-10 July). More than 100 participants, coming from 29 different countries, presented their papers on many different issues. For more information about the abstracts and to read Prof. David Ibbetson's Keynote Address ("The Challenges of Comparative Legal History"), see: http://www.rechten.vu.nl/nl/onderzoek/conferenties-en-projecten/conference-esclh/index.asp. After this great occasion of confrontation and discussion, we are looking forward to the next ESCLH Conference, which will take place at the University of Macerata (Italy) in 2014!


Posted by Dr. Stefania Gialdroni at 9:33 PM No comments: 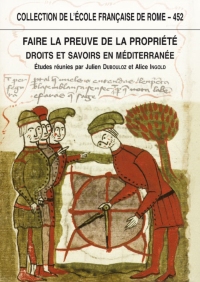 The Ecole française de Rome has recently published a volume on property in the Mediterranean from the Roman Republic until the 19th century:

Posted by Dr. Stefania Gialdroni at 7:59 PM No comments:

Academic SAILERS: The Ford Foundation and the Efforts to Shape Legal Education in Africa, 1957-1997, by Jayanth K. Krishnan

Individualization of Punishment and the Rule of Law: Reshaping the Legality in the United States and Europe between the 19th and the 20th Century, by Michele Pifferi

Judy E. Gaughan. Murder was Not a Crime: Homicide and Power in the Roman Republic, by Kevin Walker

Ethan Greenberg. Dred Scott and the Dangers of a Political Court, by Gerry Leonard

Calvin H. Johnson. Righteous Anger at the Wicked States: The Meaning of the Founders’ Constitution, by Douglas G. Smith

Edward F. Mannino. Shaping America: The Supreme Court and American Society, by Hunter R. Clark
Mark C. Miller. The View of the Courts from the Hill: Interactions Between Congress and the Federal Judiciary, by Bruce Peabody

"The Maastricht Journal of European and Comparative Law provides literature which enables both the European professional and academic lawyer to grapple with the special difficulties presented by the concept of Ius commune Europaeum": http://www.maastrichtjournal.eu/content_page.aspx?contentId=150. 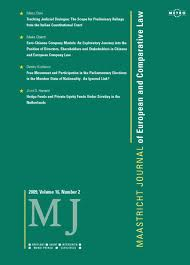 The current issue (2012-2), guest-edited by Janwillem Oosterhuis and Emanuel van Dongen, is focused on
"European Traditions – Integration or Disintegration?":
Articles:

The Revival of Romanistic Scholarship between the 19th and 20th Centuries as a ‘Centralizing Force’ in European Legal History – The Masterpieces of German Pandectist Literature Revised by Italian Translators
F. Furfaro, p. 262

The Path of the Former Yugoslav Countries to the European Union: From Integration to Disintegration and Back
S. Fabijanić Gagro, B. Vukas Jr, p. 300

Posted by Dr. Stefania Gialdroni at 11:51 PM No comments:

The Legal Status of Jews and Muslims in the Ius Commune

Director of the XXXII Course


Utrum ritus infidelium sint tolerandi, asks Thomas Aquinas in the Summa theologica, “should the rites of infidels be tolerated?” He concludes that there are limited grounds for the Church’s tolerating the existence of non-Christian cults. First and foremost, Judaism: the rites of Jews prefigure those of Christianity and should hence be allowed to continue as a confirmation of Christian truth. As for other faiths, they may be tolerated for reasons of expediency: if it would prove difficult or impossible to prohibit those rites without provoking social or political unrest (in particular where these infidels are numerous).


Christian legislators and lawyers from the fifth century on created laws that regulated, protected, or in some cases prohibited, the practice of other religions. In this course, we will look at these legists attitudes towards Judaism and Islam. In order to prove that the Church should indeed allow Jews to practice their religion, Aquinas cites Pope Gregory I, via Gratian’s Decretum. This in itself gives an important glimpse at how authority and precedent are constructed in legal discourse. Yet the question of toleration and protection of Jewish communities is found in legal sources well before Gregory the Great, in particular in a number of fourth- and fifth-century imperial constitutions preserved in the Theodosian code. Popes, bishops, kings, counts, and city councils issued a bewildering array of laws authorizing Jews to live in certain areas, build synagogues, trade with Christians, etc.; other laws prohibited or discouraged certain kinds of interactions between Jews and Christians; in other cases, Jews were expelled from cities, counties or kingdoms. In parts of Mediterranean Europe, jurists posed the same questions concerning Muslims living within Christian polities.


By studying medieval legal discourse on Jews and Muslims, this course aims not only to contribute to the understanding of the history of those minority communities within Christian Europe, but also to reflect on an important dimension of the development of legal thought in Europe. The existence of non-Christians poses questions about the universality of Christianity and Christian law. Just as in the early modern period, European colonization of non-Christian areas provoked debates on the universality of legal principles (in the works of Las Casas, Grotius and others), in the Middle Ages the existence of non-Christians both within and outside of Roman Christendom affected the development of the Ius commune. We will play close attention to the interplay between theoretical discourse on the legality (or not) of infidel law and practice and the practical application of law in daily interactions between Jews, Christians and Muslims.

Persons wishing to attend the School are requested to write to:


Posted by Dr. Stefania Gialdroni at 7:32 PM No comments: