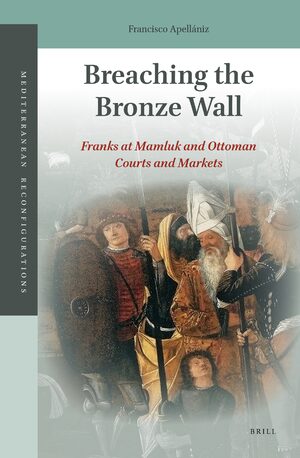 Breaching the Bronze Wall deals with the idea that the word of honorable Muslims constituted proof and with the concept that written documents and the word of non-Muslims were inferior. Foreign merchants in cities like Istanbul, Damascus or Alexandria could barely prove any claim, as neither their contracts nor their words were of any value if countered by Muslims. Francisco Apellániz explores how both groups labored to overcome these ‘biases against non-Muslims’ in the courts and markets of Mamluk Egypt and Syria of the 14th and 15th centuries, and how the Ottoman conquest (1517) imposed a new, orthodox view on the problem. The book dives into the Middle Eastern archive and the Ottoman Dīvān, and scrutinizes the intricacies of sharia and the handling of these intracacies by consuls, dragomans, qaḍīs and other legal actors.

Francisco Apellániz, Ph.D. (2009) European University Institute, is a lecturer in Islamic and Ottoman History at the University of Naples L'Orientale (and previously at the University of Aix-Marseille). He is the author of Pouvoir et finance en Méditerranée pré-moderne : le deuxième Etat mamelouk et le commerce des épices (1389-1517) (CSIC 2009).