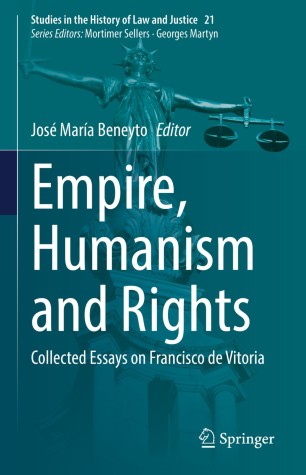 This book deals with Vitoria, Charles V and Erasmus. Vitoria’s ideas had a major influence on Charles V and his European and American policy. In turn, Erasmus’ humanism was decisive in the formation of a new international order intellectually discussed by Vitoria and put into practice by the Emperor. Shedding new light on the influence of Francisco de Vitoria and Erasmus on Charles V’s imperial policy, the book’s goal is to explore the impact of Vitoria’s thought with regard to the history of, and contemporary issues in, international law, while also comparing his thinking with that of the well-known humanist Erasmus and assessing their respective influences on the imperial policy of Charles V.

Conquest, Empire, and Peace: Vitoria, Charles V, Erasmus and the Foundations of the Law of Nations (José María Beneyto)

“The Affair of the Indies”: International Law Before and After Vitoria (Brett Bowden)

The Possibility of the New World. Social Cohesion, Legal Order and the Invention of Rights in Iberian Scholastic Thought (Massimo Meccarelli)

On War and Peace in the First Modernity: From Erasmus’ Irenic Discourse to the Just War Theory of the Founder of the School of Salamanca (Simona Langella)

Vitoria and Erasmus, Together for a New Order of the Universo Mundo (Pablo Antonio Fernández Sánchez)

José María Beneyto, Professor of International Public Law and International Relations at San Pablo CEU University, Madrid. Visiting Professor of Law, Harvard Law School. Chair of the Institute of European Studies in Madrid, a leading Jean Monnet Center at the same University. He obtained his law degree from the University of Navarre, an LL. M. from Harvard Law School (‘90), and a doctoral degree in Law and a doctoral degree in Philosophy and History from the University of Münster (Germany).