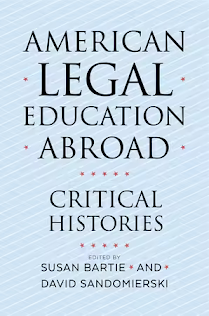 A critical history of the Americanization of legal education in fourteen countries.

The second half of the twentieth century witnessed the export of American power—both hard and soft—throughout the world. What role did US cultural and economic imperialism play in legal education? American Legal Education Abroad offers an unprecedented and surprising picture of the history of legal education in thirteen countries beyond the United States. Each study in this book represents a critical history of the Americanization of legal education, re-examining prevailing narratives of exportation, transplantation, and imperialism. Collectively, these studies challenge the conventional wisdom that American ideas and practices have dominated globally. American Legal Education Abroad begins with a foundational history by leading Harvard Law School historian Bruce Kimball, who explains the factors that created a transportable American legal model, and the book concludes with reflections from Susan Carle and Bob Gordon, whose observations on recent disruptions within US law schools suggest that their influence within the global order of legal education may soon fall into further decline. This book should be considered an invaluable resource for anyone in the fields of law, legal history, socio-legal studies, law and society, legal education, comparative law, colonial and postcolonial legal studies, globalisation and law, and intellectual and cultural history.

Susan Bartie is Lecturer in Law at the University of Tasmania. She has won a number of awards and prizes including a Dean’s Commendation for Doctoral Thesis Excellence for her PhD, a Citation for Outstanding Contribution to Student Learning from the Commonwealth Department of Education and Training (national award) for her teaching and she was awarded a British Chevening Scholarship to complete a Masters in Law at the University of Cambridge.Her recent book, Free Hands and Minds – Pioneering Legal Scholars, reveals the central ideas that underpinned the birth of modern Australian university legal education.

David Sandomierski is Assistant Professor in the Faculty of Law at Western University. He holds an SJD from the University of Toronto, where his doctoral dissertation received the Governor General’s Academic Gold Medal. He also holds degrees in civil and common law from McGill University, where he was Editor-in-Chief of the McGill Law Journal. In 2008-09 he served as law clerk to the Chief Justice of Canada, Beverley McLachlin. His recent book, Aspiration and Reality in Legal Education, examines the relationship between realism and formalism, and theory and practice, in contemporary legal education.

1. The Proliferation and Transformation of Harvard’s Case Method in the United States, 1870s–1990s. Bruce A. Kimball

2. How America Did (and Didn’t) Influence English Legal Education, circa 1870–1965. David Sugarman

9. “The Turn to the West”: American Legal Education and Educational Reforms in the Swedish Welfare State, 1950–2000. Kjell Å Modéer

11. Legal Education in France Turns Its Attention to the Harvard Model. Jean-Louis Halpérin

12. American Moment(s): When, How, and Why Did Israeli Law Faculties Come to Resemble Elite US Law Schools? Pnina Lahav

16. Rethinking Assumptions about the Global Influence of US Legal Education. Susan D. Carle

17. The Harvard Models in Their Native Habitat and Abroad: Reflections. Robert W. Gordon

Posted by Stefano Cattelan at 10:31 AM