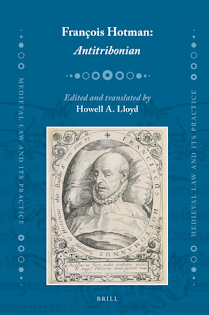 Written c. 1567 (though unpublished until 1603), this is the work of an extraordinary scholar, a radical and polemicist, rival of many of the leading intellectual and political figures of his day. According to François Hotman’s distinguished biographer Donald Kelley the Antitribonian ‘is, or should be, a landmark in the history of social and historical thought’. It is also a landmark in the history of legal thought. The present edition is the first to evaluate Hotman’s text in the context of the history of Roman law from the time of the sixth-century Byzantine Emperor Justinian I to the Germany of the Enlightenment.
ABOUT THE EDITOR/TRANSLATOR
Howell A. Lloyd, D.Phil. (Oxford, 1964), is Emeritus Professor of History at the University of Hull, UK. His publications – monographs, edited works and numerous articles, on subjects ranging from Welsh to European history, from social and economic questions to military affairs, state institutions and political ideas, include Jean Bodin, ‘This Pre-eminent Man of France': An Intellectual Biography (Oxford, 2017).
TABLE OF CONTENTS
Acknowledgements
A Note on Citations and Referencing
Introduction
A Note on Publication
Antitribonian: Text (1603) and Translation
Bibliography
Index
More information with the publisher.
Posted by Stefano Cattelan at 10:40 AM