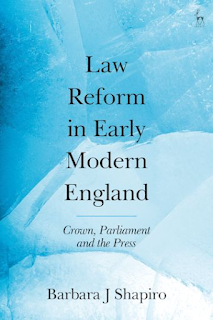 (Source: Bloomsbury)
ABOUT THE BOOK
This book provides an illuminating commentary of law reform in the early modern era (1500–1740) and views the moves to improve law and legal institutions in the context of changing political and governmental environments. Taking a fresh look at law reform over several centuries, it explores the efforts of the king and parliament, and the body of literature supporting law reform that emerged with the growth of print media, to assess the place of the well-known attempts of the revolutionary era in the context of earlier and later movements. Law reform is seen as a long term concern and a longer time frame is essential to understand the 1640–1660 reform measures.
The book considers two law reform movements: the moderate movement which had a lengthy history and whose chief supporters were the governmental and parliamentary elites, and which focused on improving existing law and legal institutions, and the radical reform movement, which was concentrated in the revolutionary decades and which sought to overthrow the common law, the legal profession and the existing system of courts. Informed by attention to the institutional difficulties in completing legislation, this highlights the need to examine particular parliaments. Although lawyers have often been seen as the chief obstacles to law reform, this book emphasises their contributions – particularly their role in legislation and in reforming the corpus of legal materials – and highlights the previously ignored reform efforts of Lord Chancellors.
ABOUT THE AUTHOR
Barbara J Shapiro is Professor Emerita and Professor in the Graduate School at the University of California, Berkeley.
TABEL OF CONTENTS
1. Introduction
2. The Early Tudors and Law Reform 1509–58
3. The Elizabethan Era 1558–1603
4. The Early Stuarts 1603–40
5. The Civil War and Parliamentary Rule 1640–49
6. Commonwealth and Protectorate 1649–60
7. The Restoration Era 1660–88
8. Revolution and Beyond 1688–1740
9. Conclusion
More information with the publisher.
Posted by Stefano Cattelan at 10:16 AM