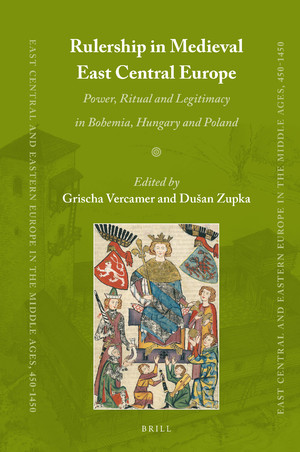 (Source: Brill)
ABOUT THE BOOK
Series: East Central and Eastern Europe in the Middle Ages, 450-1450, Volume: 78
This book provides the first detailed overview of research on rulership in theory and practice, with a particular emphasis on the monarchies of Bohemia, Hungary and Poland in the High and Late Middle Ages. The contributions examine the legitimation of rule of the first local dynasties, the ritual practice of power, the ruling strategies and practices of power in the established monarchies, and the manifold influences on the rulership in East Central Europe from outside the region (such as from Byzantium, and the Holy Roman Empire). The collection shows that these ideas and practices enabled the new polities to become legitimate members of Latin Christendom.
ABOUT THE EDITORS
Grischa Vercamer, Ph.D. (2008, Freie Universität Berlin), habilitation (2016), is Professor at the Technical University of Chemnitz. He has published monographs, articles, and collective volumes on the High and Late Middle Ages, including Perception of Good and Bad Power/Rulers in England, Poland and the Holy Roman Empire in the 12th century in the Historiography (Harrassowitz, 2020). Dušan Zupka, Ph.D. (2009, Comenius University in Bratislava) is Assistant Professor at that same University. He has published monographs and articles on power, rulership, and communication in medieval East Central Europe, including Ritual and Symbolic Communication in Medieval Hungary under the Árpád Dynasty, 1000–1301 (Brill, 2016).
TABLE OF CONTENTS
Acknowledgments List of Figures and Maps Notes on Contributors

PART 2: Legitimacy and Rulership – Beginning and Development of the First Dynasties in the Early and High Middle Ages

3 After Avars: The Beginning of the Ruling Power on the Eastern Fringe of Carolingian Empire   Martin Wihoda 4 The Rulership of the Árpádian Dynasty in the 10th–13th Centuries   Márta Font 5 The Piast Rulership   Zbigniew Dalewski

PART 3: Ritual and Politics: Established Rulership in the High and Late Middle Ages

6 Political, Religious and Social Framework of Religious Warfare and Its Influences on Rulership in Medieval East Central Europe   Dušan Zupka 7 The Ritual Practice of Power in Bohemia during the 14th Century   Robert Antonín 8 Language of Power and Communication in the Piast Dynasty: Toward a Reappraisal of Polish Political Culture of the 12th–13th Century   Marcin R. Pauk 9 Assemblies in the Holy Roman Empire and the East Central European Kingdoms: A Comparative Essay on Political Participation and Representation   Julia Burkhardt

PART 4: Structures of Power in the Late Middle Ages

10 The Irruption of the Sacred into the History of Hungarian Kings in the Mirror of the Angevin “Illuminated Chronicle” (around 1358)   Vinni Lucherini 11 The Last Piasts: Legitimating Royal Rule in Fourteenth Century Poland   Paul W. Knoll 12 Royal Power and Military Administration in Angevin Hungary   Attila Bárány 13 Governance System in Poland during the 15th Century   Bożena Czwojdrak

PART 5: Influences on Rulership in East Central Europe from Outside