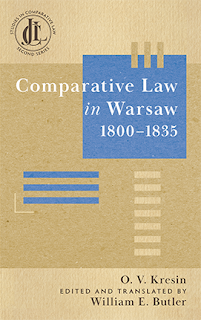 A title in the JCL Studies in Comparative Law, Second Series.

The Partitions of Poland (1772, 1793, 1795) and Napoleon’s invasions of Central and Eastern Europe (1806–1813) made the territories of the former Polish-Lithuanian Commonwealth an unexpected recipient of legal traditions and substantive law imposed by conquering neighbors. At the same time the science of comparative law was beginning to develop. Influenced by these events and a keen interest in German legal thought and French codification, Polish jurists debated the appropriate balance of imported versus autochthonic law, the proper role of legal education, the development of a legal consciousness and the social role of the jurist. This is the first comprehensive study in English to examine the genesis of comparative legal studies in Poland, and Polish contributions to that field, during this decisive era in European history.

Posted by Stefano Cattelan at 10:18 AM