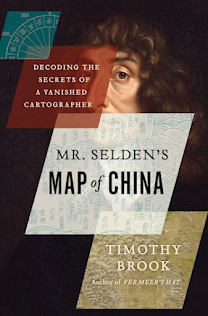 (Source: Bloomsbury Press)
ABOUT THE BOOK

From the author of the award-winning Vermeer's Hat, a historical detective story decoding a long-forgotten link between seventeenth century Europe and China.

Timothy Brook's award-winning Vermeer's Hat unfolded the early history of globalization, using Vermeer's paintings to show how objects like beaver hats and porcelain bowls began to circulate around the world. Now he plumbs the mystery of a single artifact that offers new insights into global connections centuries old. In 2009, an extraordinary map of China was discovered in Oxford's Bodleian Library-where it had first been deposited 350 years before, then stowed and forgotten for nearly a century. Neither historians of China nor cartography experts had ever seen anything like it. It was so odd that experts would have declared it a fake-yet records confirmed it had been delivered to Oxford in 1659. The “Selden Map,” as it is known, was a puzzle that needing solving. Brook, a historian of China, set out to explore the riddle. His investigation will lead readers around this elegant, enigmatic work of art, and from the heart of China, via the Southern Ocean, to the court of King James II. In the story of Selden's map, he reveals for us the surprising links between an English scholar and merchants half a world away, and offers novel insights into the power and meaning that a single map can hold. Brook delivers the same anecdote-rich narrative, intriguing characters, and unexpected historical connections that made Vermeer's Hat an instant classic.

ABOUT THE BOOK
Timothy Brook received a John Simon Guggenheim Memorial Foundation Fellowship for the work on which this book is based. He holds the Shaw Chair in Chinese studies at Oxford University and is the author of many books, including the award-winning Confusions of Pleasure.
More information with the publisher.
Posted by Stefano Cattelan at 8:21 AM