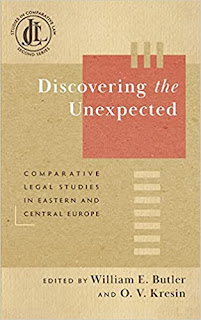 (Source: Talbot Publishers)
ABOUT THE BOOK
A title in the JCL Studies in Comparative Law, Second Series.
Comparative lawyers from Belarus, Turkish Republic of Northern Cyprus, Czech Republic, Hungary, Poland, Romania, Russia, Ukraine and the United States explore the contributions of Eastern and Central European comparatists mostly unknown outside the region in 25 essays addressing individuals, processes and institutions from the sixteenth century to recent times. Most names will be unfamiliar to comparative lawyers not from the region; some overlap in their geographical affiliation and the boundaries of the region itself are controversial. Several contributors give attention to Slavic law and its place within historical comparative studies. New light is cast on the development of comparative legal studies during the Soviet era and some of the principal personalities involved.
ABOUT THE EDITORS
William E. Butler is the John Edward Fowler Distinguished Professor of Law, Dickinson School of Law, Pennsylvania State University; Emeritus Professor of Comparative Law, University of London (University College London); Foreign Member, National Academy of Sciences of Ukraine and National Academy of Legal Sciences of Ukraine.
Oleksiy Kresin is a leading Ukrainian comparative lawyer; Head, Center of Comparative Jurisprudence, Koretsky Institute of State and Law, National Academy of Sciences of Ukraine; Secretary-General, Ukrainian Association of Comparative Jurisprudence; President, Ukrainian National Committee, International Association of Legal Sciences; Associate, International Academy of Comparative Law.
More information with the publisher.
Posted by Stefano Cattelan at 10:38 AM