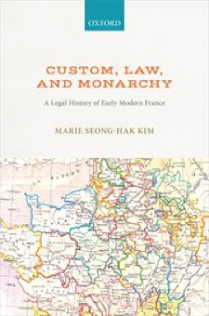 (Source: OUP)
ABOUT THE BOOK
Ancien régime France did not have a unified law. Legal relations of the people were governed by a disorganized amalgam of norms, including provincial and local customs (coutumes), elements of Roman law and canon law, royal edicts and ordinances, and judicial decisions.  All these sources of law coexisted with little apparent internal coherence. The multiplicity of laws and the fragmentation of jurisdiction were defining features of the monarchical era. Legal historians have focused on popular custom and its metamorphosis into customary law, which covered a broad spectrum of what we call today private law. This book sets forth the evolution of law in late medieval and early modern France, from the thirteenth through the end of the eighteenth century, with particular emphasis on the royal campaigns to record and reform customs in the sixteenth century. The codification of customs in the name of the king solidified the legislative authority of the crown, which was an essential element of the absolute monarchy. The achievements of legal humanism brought custom and Roman law together to lay the foundation for a unified French law. The Civil Code of 1804 was the culmination of these centuries of work. Juristic, political, and constitutional approaches to the early modern state allow an understanding of French history in a continuum.
ABOUT THE BOOK
Marie Seong-Hak Kim is a Professor of History at St Cloud State University. She is the author of Michel de L’Hôpital: The vision of a Reformist Chancellor during the French Religious Wars (1997), Law and Custom in Korea: Comparative Legal History (2012), and Constitutional Transition and the Travail of Judges: The Courts of South Korea (2019). She was a Fellow of the Collegium de Lyon, the Netherlands Institute for Advanced Study, the Freiburg Institute for Advanced Studies, and the Käte Hamburger Kolleg Recht als Kultur. As a native of South Korea, she graduated from Ewha Womans University and received her PhD and JD from the University of Minnesota. She is a member of the Minnesota Bar.
TABLE OF CONTENTS
1. Introduction
2. Custom in Late Medieval France
3. The Redaction of Customs
4. The Reformation of Customs
5. La Coutume and la Législation
6. The Idea of "Our French Law"
7. The Crown and the Constitution
8. De la coutume au Code civil
9. Conclusion
Bibliography
Index
Further information with the publisher.
Posted by Stefano Cattelan at 11:56 AM