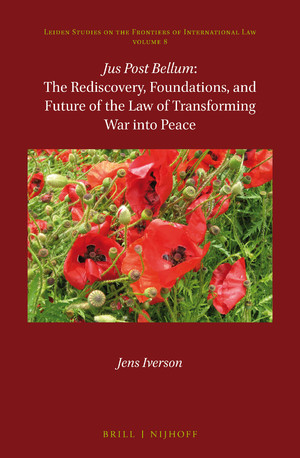 Series:  Leiden Studies on the Frontiers of International Law, Volume: 8

In Jus Post Bellum, Jens Iverson provides the Just War foundations of the concept, reveals the function of jus post bellum, and integrates the law that governs the transition from armed conflict to peace. This volume traces the history of jus post bellum avant la lettre, tracing important writings on the transition to peace from Augustine, Aquinas, and Kant to more modern jurists and scholars. It explores definitional aspects of jus post bellum, including current its relationship to sister terms and related fields. It also critically evaluates the current state and possibilities for future development of the law and normative principles that apply to the transition to peace. Peacebuilders, scholars, and diplomats will find this book a crucial resource.

More information and a table of contents are available with the publisher.

Posted by Stefano Cattelan at 10:28 AM