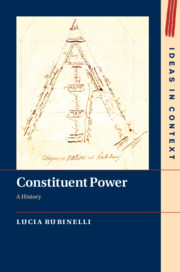 Cambridge University Press has published a history of constituent power.

From the French Revolution onwards, constituent power has been a key concept for thinking about the principle of popular power, and how it should be realised through the state and its institutions. Tracing the history of constituent power across five key moments - the French Revolution, nineteenth-century French politics, the Weimar Republic, post-WWII constitutionalism, and political philosophy in the 1960s - Lucia Rubinelli reconstructs and examines the history of the principle. She argues that, at any given time, constituent power offered an alternative understanding of the power of the people to those offered by ideas of sovereignty. Constituent Power: A History also examines how, in turn, these competing understandings of popular power resulted in different institutional structures and reflects on why contemporary political thought is so prone to conflating constituent power with sovereignty.