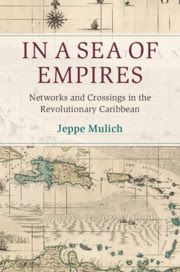 Cambridge University Press is publishing a new book on the interconnected nature of imperial politics and colonial law in the maritime borderlands of the Leeward Islands in the early 19th century.

At the turn of the nineteenth century, the Caribbean was rife with revolutionary fervor and political turmoil. Yet, with such upheaval came unparalleled opportunities. In this innovative and richly detailed study, Jeppe Mulich explores the interconnected nature of imperial politics and colonial law in the maritime borderlands of the Leeward Islands, where British, Danish, Dutch, French, Spanish, and Swedish colonies both competed and cooperated with one another. By exploring the transnational networks involved in trade, slavery, smuggling, privateering, and marronage, he offers a new account of the age of revolutions in the Caribbean, emphasizing the border-crossing nature of life in the region. By approaching major shifts in politics, economy, and law from the bottom-up, a new story of early nineteenth-century globalization emerges – one that emphasizes regional integration and a multiplicity of intersecting networks.

Jeppe Mulich is Teaching Associate in Global History at the University of Cambridge and St John's College.