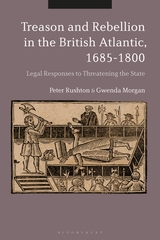 Bloomsbury is publishing a new book on treason and rebellion in the British Atlantic.

This book examines internal political conflicts in the British Empire within the legal framework of treason and sedition. The threat of treason and rebellion pervaded the British Atlantic in the 17th and 18th centuries; Britain's control of its territories was continually threatened by rebellion and war, both at home and in North America. Even after American independence, Britain and its former colony continued to be fearful that opposition and revolution might follow the French example, and both took legal measures to control both speech and political action.

This study places these conflicts within a political and legal framework of the laws of treason and sedition as they developed in the British Atlantic. The treason laws originated in the reign of Edward III, and were adapted and modified in the 16th and 17th centuries. They were exported to the colonies, where they underwent both adaptation and elaboration in application in the slave societies as well as those dominated by free settlers. Relationships with natives and European rivals in the Americas affected the definitions of treason in practice, and the divided loyalties of the American revolutionary war added further problems of defining loyalty and treachery.

Treason and Rebellion in the British Atlantic, 1685-1800 offers a new study of treason and sedition in the period by placing them in a truly transatlantic perspective, making it a valuable study for those interested in the legal and political of Britain's empire and 18th-century revolutions.

Peter Rushton is Professor of Historical Sociology at the University of Sunderland, UK. He has published widely on witchcraft, problems of marriage and family life, the poor law and crime in C18th England. He is the joint author of Eighteenth Century Criminal Transportation (Palgrave, 2004).
Dr Gwenda Morgan is Honorary Research Fellow in the Department of History at the University of Durham, UK.  She has published widely on law and society in early America.  Her latest book is The Debate on the Modern American Revolution: Issues in Historiography (MUP 2007).