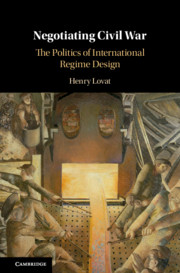 Cambridge University Press is publishing a book on the post-WWII regime for civil wars.

Civil war has been a fact of political life throughout recorded history. However, unlike inter-state wars, international law has not traditionally regulated such conflicts. How then can we explain the post-1945 emergence and evolution of international treaty rules regulating the conduct of internal armed conflict: the 'Civil War Regime'? Negotiating Civil War combines insights derived from Realist, Rationalist, Liberal, and Constructivist approaches to International Relations to answer this question, revisiting the negotiation of the 1949 Geneva Conventions, the 1977 Additional Protocols, and the 1998 Rome Statute of the International Criminal Court. This study provides a rigorous, critical account of the making of the Civil War Regime. Sophisticated and persuasive, it illustrates the complex interplay of material, ideational, social, and strategic factors in shaping these rules with important lessons for the making and unmaking of international law in a rapidly shifting international political, economic, and security environment.

Henry Lovat is Lord Kelvin Adam Smith Research Fellow at the University of Glasgow. Formerly a legal adviser with the UK Government, he has also worked with the Council of Europe, United Nations High Commissioner for Refugees (UNHCR), United Nations Relief and Works Agency for Palestine Refugees in the Near East (UNRWA), and various UK and international NGOs, as well as in legal practice in the City of London.