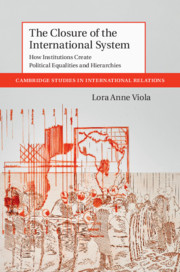 Lora Anne Viola is a professor of political science, researching and teaching on international organizations, international relations theory, and US foreign policy. She is co-editor of Historical Institutionalism and International Relations (Oxford University Press, 2016). She is a recipient of the American Political Science Association's Alexander L. George Article Award, as well as research funding from the German National Science Foundation.

Email ThisBlogThis!Share to TwitterShare to FacebookShare to Pinterest
Labels: history of institutions, history of international law