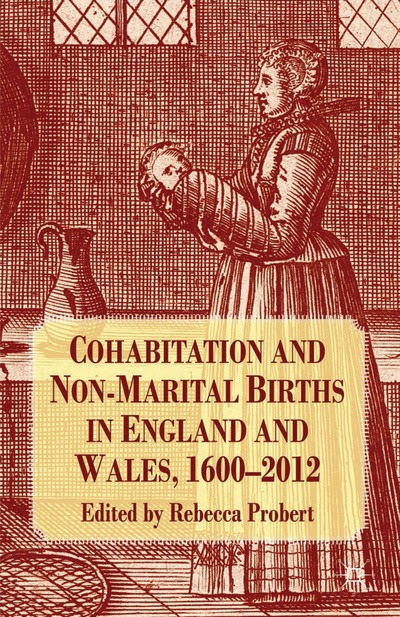 Cohabitation and Non-Marital Births in England and Wales (1600-2012), edited by Rebecca Probert, (University of Warwick)

Today, almost half of all children are born outside marriage, with cohabiting relationships accounting for the majority of such births. But what was the situation in earlier centuries? Bringing together leading historians, demographers and lawyers, this interdisciplinary collection examines the changing context of non-marital child-bearing in England and Wales since 1600. Drawing on Private Acts of Parliament, ecclesiastical court records, reported cases, sessions files, coronial records, poor law records, petitions to the London Foundling Hospital, the registers of the London Bridewell, the records of charitable institutions, surveys and modern demographic data, it not only shows the relative rarity of cohabitation in earlier periods but also discovers the nature of individual relationships. It also explores how differences in the extent of both non-marital child-bearing and cohabitation emerge depending on definition, source material, interpretation and location, building up a more nuanced picture of past practices.

3. 'All He Wanted Was To Kill Her That He Might Marry The Girl': Broken Marriages and Cohabitation in the Long Eighteenth Century; Joanne Bailey

4. 'They Lived Together As Man And Wife': Plebeian Cohabitation, Illegitimacy, and Broken Relationships in London, 1700-1840; Samantha Williams

7. The Kindness of Strangers Revisited: Fostering, Adoption and Illegitimacy in England, 1860-1930; Ginger Frost

9. Cohabitation and Births Outside Marriage after 1970: A Rapidly Evolving Phenomenon; John Haskey

10. Cohabitation and Marriage in Britain Since the 1970s; Éva Beaujouan And Máire Ní Bhrolcháin