BOOK: "Making Race in the Courtroom: The Legal Construction of Three Races in Early New Orleans", by Kenneth R. Aslakson (2014) 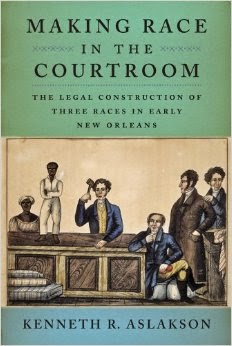 No American city’s history better illustrates both the possibilities for alternative racial models and the role of the law in shaping racial identity than New Orleans, Louisiana, which prior to the Civil War was home to America’s most privileged community of people of African descent. In the eyes of the law, New Orleans’s free people of color did not belong to the same race as enslaved Africans and African-Americans. While slaves were “negroes,” free people of color were gens de couleur libre, creoles of color, or simply creoles. New Orleans’s creoles of color remained legally and culturally distinct from “negroes” throughout most of the nineteenth century until state mandated segregation lumped together descendants of slaves with descendants of free people of color.

Much of the recent scholarship on New Orleans examines what race relations in the antebellum period looked as well as why antebellum Louisiana’s gens de couleur enjoyed rights and privileges denied to free blacks throughout most of the United States. This book, however, is less concerned with the what and why questions than with how people of color, acting within institutions of power, shaped those institutions in ways beyond their control. As its title suggests, Making Race in the Courtroomargues that race is best understood not as a category, but as a process. It seeks to demonstrate the role of free people of African-descent, interacting within the courts, in this process.

"Historians are fond of spotlighting the role of 'human agency' in making history. Kenneth Aslakson is one of those rare scholars who actually map out its modus operandi—in this case, in the courtrooms of New Orleans, where free people of color used jurisprudence to defend their rights and, unwittingly, erect a tripartite racial order that was Caribbean before it was American.  Aslakson’s research is superb, his writing unfailingly clear, his arguments smart and crisp. Making Race in the Courtroom joins a lengthening bookshelf that is changing how we think about race in America."
—Lawrence N. Powell, Tulane University

"Between 1791 and 1812, as New Orleans was transformed by the consequences of the Haitian Revolution and the Louisiana Purchase, the city's free people of color fought to establish and defend their freedoms and to protect their property rights. Despite facing a legal, political, and social system that was increasingly hostile to their interests, this book demonstrates how they successfully utilized the court system to carve out a space for themselves within New Orleans' racial hierarchy. Most importantly, Aslakson's exhaustive examination of the records of the New Orleans City Court reveals the ways in which free people of color participated in the continuous project that was race making in the early republic."
—Jennifer M. Spear, Simon Fraser University