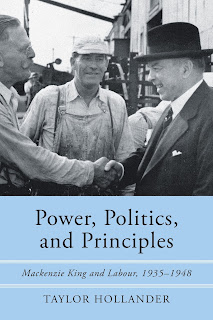 University of Toronto Press just published a book on the creation of P.C. 1003, a seminal piece of wartime labour law legislation in Canada.

Set against the backdrop of the U.S. experience, Power, Politics, and Principles uses a transnational perspective to understand the passage and long-term implications of a pivotal labour law in Canada. Utilizing a wide array of primary materials and secondary sources, Hollander gets to the root of the policy-making process, revealing how the making of P.C. 1003 in 1944, a wartime order that forced employers to the collective bargaining table, involved real people with conflicting personalities and competing agendas.

Each chapter of Power, Politics, and Principles begins with a quasi-fictional vignette to help the reader visualize historical context. Hollander pays particular attention to the central role that Mackenzie King played in the creation of P.C. 1003. Although most scholars describe the Prime Minister’s approach to policy decisions as calculating and opportunistic, Power, Politics, and Principles argues that Mackenzie King’s adherence to moderate principles resulted in a less hostile legal environment in Canada for workers and their unions in the long run, than a more far-reaching collective bargaining law in the United States.

Illustrations
Preface
Acknowledgments
Introduction
The Unity of Our Country, Fall 1935-Fall 1939
The Prime Minister
The Labour Movement
The Employers
Other Groups
The Breastplate of Righteousness, Fall 1939-Fall 1941
More of the Same
Incongruities
Fine-Tuning
Plant Committees
The Task that Lies Ahead, Fall 1941-Fall 1942
The Campaign
Intransigence
Respect and Dignity
Adherence
A Code of Labour Relations, Fall 1942-Spring 1944
The Impetus
The Experts
The Code
A Fine Conclusion, Spring 1944-Summer 1948
Tempering
The Rand Formula
Postwar Tumult
The Middle of the Road
Afterword
Reference
Index

Posted by Filip Batsele at 4:19 PM