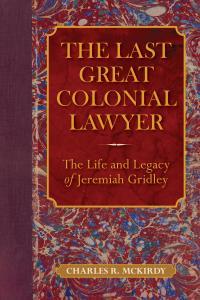 The University of Massachusetts Press has published a new book on the life of an important 18th century New England lawyer, Jeremiah Gridley.

Jeremiah Gridley (1702–1767) is considered “the greatest New England lawyer of his generation,” yet we know little about him. Most of his renown is a product of the fame of his students, most notably John Adams. Gridley deserves more. He was an active participant in the Writs of Assistance trial and the Stamp Act controversy, and as a leader of the Boston bar, an editor, speculator, legislator, and politician, his life touched and was touched by much that was integral to eighteenth-century Massachusetts.

The Last Great Colonial Lawyer presents a portrait of Gridley against the background of his times. Religious controversies enter into this narrative, as do colonial wars and the increasing strains with Great Britain, but Charles R. McKirdy also rescues from the footnotes of time subjects such as the smallpox epidemic of 1721 and the currency crisis of the 1740s. Because Gridley was above all a lawyer, the primary focus is on his cases, which illuminate in a unique and very human way attitudes regarding race, status, commerce, property, and power.

Charles R. McKirdy litigated cases for more than twenty-five years and holds a PhD in history and a law degree from Northwestern University. He is author of Lincoln Apostate: The Matson Slave Case, and he has published in the American Journal of Legal History, the Journal of Criminal Law and Criminology, and the Journal of Legal Education.