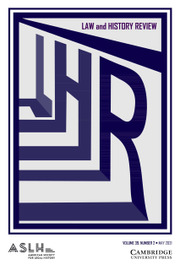 Abstract: The handling of infanticide in late medieval France offers modern audiences an underappreciated paradox: on the one hand infant murder was deplored as grave sin and crime, on the other hand, it was a pardonable offence, even the infanticidal singlemother who had killed to conceal her sin could obtain royal grace. This is far more than the usual story of law differing from practice. Christian ideology of mercy and forgiveness for sin played a central role in shaping the regulation of illegitimate births as well as abortions, stillbirths, and infanticide. Church and secular authorities alike sought to prevent as well as punish the death of infants, but they also created and implemented systems of justice with the explicit purpose of providing mercy to the repentant murderer, even an infanticide.

Abstract: In August 1677, the Genevan consistory, a church court preoccupied with regulating sexual sin, summoned Louise Bouffa. Louise was a single woman recently hired by the wealthy Sarasin family as a wet nurse, an occupation that signaled to the consistory that she had recently given birth. The pastors and elders wanted to know who the father was and where the child was now. Louise was at first evasive. She claimed not to know the name of the father, although she did admit that the man with whom she had had sex was “very well dressed.” She said that she had given birth not far from Geneva, in the village of Gy, where the baby had been baptized and then had died. These claims turned out to be false. The Genevan consistory contacted the pastor in Gy who denied that her child had been baptized there. Summoned to tell the truth, Louise admitted that she had given the baby away to a man named Bertet to present as his own child for baptism, although she added that she was aware he had not done so. She also revealed that the father of the infant was a well-respected Genevan citizen and lawyer, Léonard Revillod, in whose household she had been working when she became pregnant. The consistory admonished Louise for lying about the baptism and sent her and her master to the criminal court to be prosecuted. This court, an elected body called the Small Council, duly fined Léonard for having had sex with his servant and for having “obliged her to give the baby to a stranger.” As for Louise, she was merely sent back to the consistory, which excluded her from participating in communion. No further investigation of the fate of the infant ensued.

Abstract: “The Contradictions of Reform” analyses the complications of reform of legislation regulating punishment for women convicted of infanticide in Connecticut between 1790 and 1860, within the context of broader social, cultural, and legal understandings of the crime within the US. These changes are investigated through a close reading of petitions for clemency to Connecticut's General Assembly in which women convicted of the crime petitioned the state legislature seeking reduced sentences. The article argues that although the nineteenth century opened with legislation that promised death to all women convicted of infanticide, in practice courts and juries never imposed the penalty. Instead, juries proved reluctant to convict and/or death sentences were not imposed, even if juries found women guilty. In the early decades of the nineteenth century, the Connecticut Assembly reformed existing infanticide law in response to a number of social debates about the merits of the death penalty, particularly for women. The article argues, however, that these reforms counter-intuitively resulted in less favorable outcomes for those convicted of the crime, as they found themselves facing lengthy prison sentences. Such an outcome was unlikely in the early decades of the nineteenth century. The article, therefore, demonstrates, the “contradictions of reform.”

Abstract: The criminal trials of twenty-seven women processed for the crimes of abortion and infanticide in the state of Puebla, Mexico during the nineteenth century reveal both community and state perspectives about contemporary notions of gender, motherhood, and honor. This paper argues that while there was an increase in both denunciations and convictions for these crimes in the nineteenth century, women's peers acted as reluctant participants in their incrimination. Both local and higher court justices convicted women more frequently for abortion and infanticide than they had done in the colonial era, but nonetheless sentenced them with considerable leniency. Some of the explanation for their leniency lay in court officials' view that indigenous women, who constituted a considerable percentage of the defendants, were too “rustic” or “ignorant” to be held responsible for their actions. The cases also reveal, however, that courts and communities shared the view that any means–including committing violent crimes or hiding pregnancies–justified the ends of protecting plebeian women's reputation of sexual honor.

Abstract: Debates over constitutional originalism almost always center on meaning. Questions are typically focused, concentrated on the meaning of particular constitutional clauses at the moment of their inception: the Commerce Clause in 1787, the Second Amendment in 1791, or the Fourteenth Amendment in 1868. Given the prevalence of these investigations, theoretical and methodological debates over how to recover original constitutional meaning are concentrated on either the kind of meaning that should be targeted—original public meaning, original intended meaning, or original legal meaning—or how that meaning can be recovered—through conventional legal reasoning, corpus linguistics, or thick reconstruction of historical context. Regardless, virtually all originalist theories of meaning uncritically presuppose the nature of the object possessing that meaning: they take as given what the Constitution itself is and, by implication, what it has always been. Although it might not be clear what the Constitution originally meant, it is straightforward what the original Constitution originally was. It just is the Constitution.

Does Originalism Have a Natural Law Problem?
John Mikhail, pp. 361-367

Abstract: Gienapp's critical move is to shift our attention from semantics to ontology. What is the Constitution? How was it conceived to exist in 1787, and how has that conception changed over time? These questions must be squarely addressed, he insists, before asking what the Constitution means. Does this whole text-focused enterprise rest on a mistake? Drawing on a wealth of primary sources and modern scholarship, Gienapp makes a strong and interesting case that it does. Boiled down, his main argument is that the founders were predominantly natural lawyers, and thus conceived of law quite differently than most originalists typically do.

Abstract: In 2019, William Twining and Harry Arthurs, academic lawyers whose careers peaked during the second half of the twentieth century, published memoirs revealing the central motivations and forces underlying their intellectual endeavor. Their books are a source of great nourishment, provoking readers to think deeply about the central challenges of the discipline of law and what might be done to bring it closer to realizing its full potential. They also reveal what it was like to be a leading academic who pushed disciplinary boundaries, challenging central disciplinary norms repeatedly, over many decades, while the universities and societies surrounding them grew in size and enjoyed increased prosperity and while academics—legal and otherwise—were cast in changing lights. During this time, writing and teaching about the nature and purposes of law moved from the desks of a few well-known figures into the hands of an increasingly diverse mass. This review considers and compares the contributions of these memoirs to the history of legal scholars. It also examines the relevance of each book to their primary readership: twenty-first century academic lawyers.

Abstract: Christine Desan's Making Money: Coin, Currency, and the Coming of Capitalism provides an authoritative answer to a fundamental question about medieval English money that has puzzled a few scholars, but that has been largely ignored by most: were medieval payments normally weighed or counted? The same question can be expressed differently as: were payments made by weight or by tale at face value; or again, was the value of money determined by its intrinsic content or by royal decree? But why might this curious distinction between counting payments and weighing them matter?