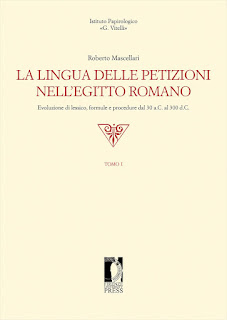 (Source: https://fupress.com/catalogo/la-lingua-delle-petizioni-nell-egitto-romano/7342)
This book investigates the linguistic and formal aspects of more than a thousand requests for justice and protection preserved in Egyptian papyri of the Roman Principate, mainly written in Greek. For many centuries in Egypt, from the Ptolemaic period to the late Roman Empire, petitions addressed to the judicial authorities shared the same textual structure and made use of recurring lexical formulas. Such uniformity was the result of the adherence by scribes and legal advisers to repertoires that had wide circulation. This study evaluates the correspondence between the formulas of the petitions and legislation, normative conventions, and spoken and literary language, and how these factors interacted with each other over the centuries.
More information: https://fupress.com/catalogo/la-lingua-delle-petizioni-nell-egitto-romano/7342
Posted by Arthur Barretto at 9:00 AM