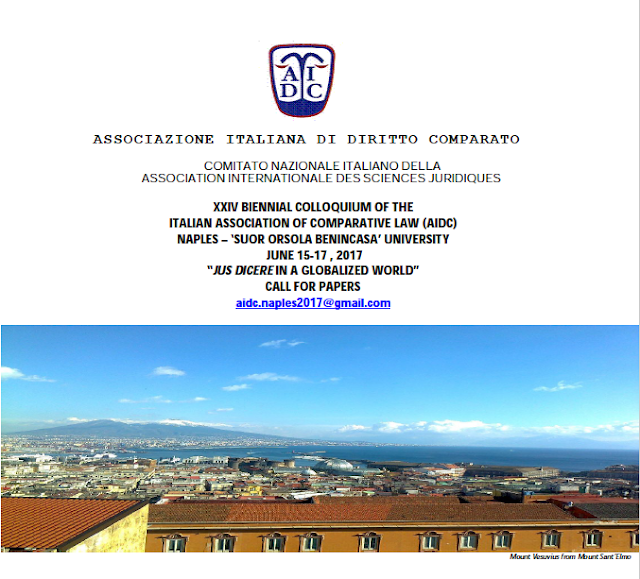 WHAT Ius dicere in a globalized world, the XXIV Biennial Colloquium of the Italian Association of Comparative Law (AIDC), Colloquium and Call for papers

The colloquium intends to put the focus, from a comparative perspective, on some of the following topics: 1. Can one agree on the statement that in the Western world the notion of jurisdiction is considerably fragmented and is no longer limited to the national State (or expression of public sovereignty) courts, and is dispersed in a multiplicity of experiences? Private jurisdictions (such as ADR, arbitration, sport courts etc.); and trans-national jurisdictions, set by international treaties, or by lex mercatoria).
2. What do we mean today, in the western world, by “jurisdiction”? What are its essential features? Can the resolution of disputes still be considered the main function of courts of law or should the traditional model of jurisdiction be enriched to encompass the new role of courts in many social settings (e.g. transitional justice and its emphasis on reconciliation)? Should one look essentially at the formal elements [such as independence of the decisionmaker(s) and adversary procedures], or at the functional role [e.g. adjudication which imitates traditional court jurisdiction], or a legal-realist approach [jurisdiction is what is perceived as such]?
3. To what extent can/are Western models exportable/transposable in non-Western contexts? To what extent have Western models of jurisdiction imported ideas from non-Western traditions?
4. The traditional notion of rule-of-law is strongly related to the control by the courts and the enforceability of their decisions. Should the notion be adapted to a changing reality?
5. What is the effect of the fragmentation of jurisdiction on the traditional court system? Are there consequences on the traditional (in continental Europe) distinction between civil, criminal and administrative jurisdictions?
6. What, if any, are the effects, both theoretical and practical, on the apportionment of powers and functions with regard also to the branches of the legislative and government? Is jurisdiction encroaching on Parliament and Government?
7. What are the implications of those forms of jurisdiction directly challenging the role of national States, e.g. those connected to international investment treaties (Investor-state dispute settlement)? Do they represent a conditioning of State prerogatives able to weigh upon State obligations towards their citizens?
8. Increasingly contemporary societies are concerned with the administrative costs related to providing access to justice, and jurisdictional procedures are seen as a service dependent on budget allocations. What are the emerging models, and to what extent are they circulating and hybridized? Is a global market for judicial services feasible? Are “digital jurisdictions” an appropriate alternative?
9. Can numbers and statistics help us to compare jurisdictions and jurisdictional models? And how?
10. Jurisdiction is intimately associated with effectiveness: can/should one compare/classify models according to the degree of compliance, whether spontaneous or forced?


11. Adjudication requires a variety of remedies: what is the relation today between the two? What is the circulation of remedies within the various forms of jurisdiction, within the same legal system or among different legal systems ?
12. Sociology of adjudicators: judges, arbitrators, mediators. And what is the role of lawyers (in a wide sense) in the various jurisdictions? What is the effect on the recruitment of ‘traditional’judges?
13. Involvement of laypersons (i.e. non-lawyers) in adjudication (e.g. scientific experts in IP controversies or in international trade controversies; historians in civil liability or property cases).
14. Rules of procedure: imitation, circulation, adaptation, rejection. Through legislative instruments? Or self-regulation? Or practice by the parties involved?
15. “Jurisdiction shopping”: a disparaging notion or an occasion for effective application of comparative law in the legal profession?
16. Courts of law and courts of public opinion. How is the judicial process communicated to the public? What is the interaction between traditional and social media and the administration of justice? Should and can safeguards be taken? Or are we facing, at the end of the day, a “narrative” issue?
II. TO WHOM THE CALL FOR PAPERS IS ADDRESSED
AIDC organizes on a biennial basis a “younger comparatists colloquium” (the last one, this year, was held in Campobasso) open to PhD candidates and holders, lecturers, adjunct professors; and the ordinary biennial colloquium (the present is the 24th), generally open to full and associate professors.
Therefore the selection committee will prefer papers presented by full and associate professors, although it may make a limited amount of exceptions. Papers should be in Italian or English, and may be presented in either language.
Simultaneous translation will not be provided.
III. ORGANIZATIONAL ASPECTS
The proposal must be submitted by December 20, 2016. Acceptance will be communicated by mid-January. Within 10 days from acceptance, the participation fee (€ 100) must be paid. If not, acceptance will be forfeited and the selection committee will move on to other candidates. This requirement is essential in order to avoid that no-show of some rapporteurs preclude the possibility to others to present their papers.
The Colloquium will be organized in plenary opening (Thursday, June 15) and closing (Saturday, June 17) sessions (with invited speakers). And parallel sessions (Friday, June 16) divided according to topics. It is expected that up to 35 papers will be presented in a time slot not exceeding 20 minutes per speaker.

The on-line periodical “Comparative Law Review”, sponsored by AIDC, intends to devote a special issue to the proceedings of the Colloquium. Participants are however free to publish their papers wherever they deem most appropriate.
Papers in Italian may also be submitted for publication to “Diritto pubblico comparato ed europeo”, and to “Comparazione e diritto civile”, the other two leading Italian comparative law reviews.
IV. OTHER ASPECTS
The origins of the “Suor Orsola Benincasa” University are deeply rooted in the grandeur of the 17th and 18th century when Naples was the capital of one of the kingdoms of the Spanish Empire and the largest town in Italy. Originally a women’s monastic institution,
it became entirely secular at the end of the 19th century and provided higher education training for primary and secondary school teachers. A century later it has become a fullfledged university – the only private university in Southern Italy – with three faculties (Law, Humanities, and Education) and offers over 15 different degrees. It still occupies the vast architectural complex on Mount Sant’Elmo with a stunning view on the Gulf of Naples, Sorrento, Capri and Mount Vesuvius. It hosts several very rich art collections and a ‘Toy Museum’ and a ‘Musical Instruments Museum’
[http://www.unisob.na.it/ateneo/a001_a.htm?vr=1&lg=en ].
V. HOW TO SUBMIT A PROPOSAL
Abstracts should be submitted by e-mail at aidc.naples2017@gmail.com in Word
format, following this order:
a) author(s)
b) affiliation
c) e-mail address
d) title of abstract
e) body of abstract (apx 250 words)


Abstract file should be entitled: Family Name_Last Name.doc
Posted by Unknown at 3:00 PM