BOOK: "Before Anarchy: Hobbes and His Critics in Modern International Thought" by Theodore Christov (2016) 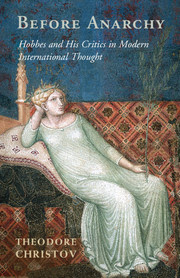 Before Anarchy: Hobbes and His Critics in Modern International Thought, by Theodore Christov
all information here