BOOK: "The Constitution of the United Kingdom. A Contextual Analysis" by Peter Leyland (June 2016) 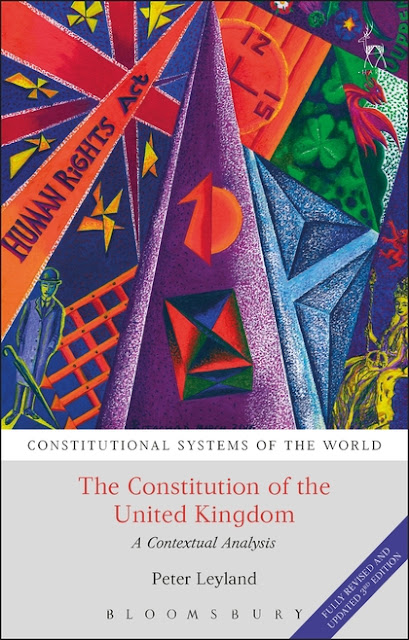 The Constitution of the United Kingdom. A Contextual Analysis, by Peter Leyland, third edition
all information here

This acclaimed book provides a topical and contextual outline of the principles,doctrines and institutions that underpin the United Kingdom constitution. The third edition of The Constitution of the United Kingdom has been comprehensively revised and updated to take account of recent constitutional developments and debates. This includes: the revised framework for devolution following the 2014 referendum in Scotland, the constitutional ramifications of the realignment of UK politics reflected in the result of the 2015 general election and the debate over the possible replacement of the Human Rights Act 1998 with a British Bill of Rights.
The chapters are written in sufficient detail for anyone coming to the subject for the first time to develop a clear and informed view of how the constitution is arranged and how it operates. The main themes include: discussion of the history, sources and conventions of the constitution; later chapters deal with: constitutional principles, the role of the Crown, Parliament and the electoral system, government and the executive, the constitutional role of courts including the protection of human rights, the territorial distribution of power between central, devolved and local government, and the European Union dimension. In addition, the book offers analysis of the evolution of the uncodified UK constitution, its strengths and perceived weaknesses, and of reforms aimed at its modernisation.

Peter Leyland is Professor of Public Law at SOAS, University of London and Emeritus of London Metropolitan University.