BOOK: "The Constitution of Romania. A Contextual Analysis" by Bianca Selejan-Gutan (2016) 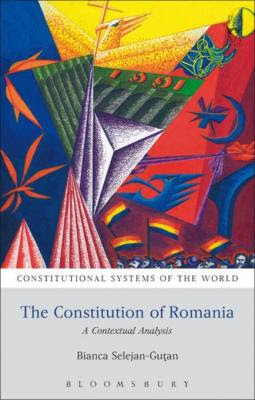 The Constitution of Romania. A Contextual Analysis, by Bianca Selejan-Gutan
all information here

In December 1989, Romania became the last Eastern European communist country to break with its communist dictatorship, the most powerful in the region at the time. It has struggled ever since to overcome the transition to democracy and to become a ‘full-time’ member of the Western democratic community of states. This book provides a contextual analysis of the Romanian constitutional system, with references to the country’s troubled constitutional history and to the way in which legal transplantation has been used. The Constitution’s grey areas, as well as the gap between the written constitution and the living one, will also be explained through the prism of recent events that cast a negative shadow upon the democratic nature of the Romanian constitutional system.
The first chapters present a brief historical overview and an introduction to Romanian constitutional culture, as well as to the principles and general features of the 1991 Constitution. The chapters which follow explain the functioning of the institutions and their interrelations—Parliament, the President, the Government and the courts. The Constitutional Court has a special place in the book, as do local government and the protection of fundamental rights. The last chapter refers to the mechanisms and challenges of constitutional change and development.

Bianca Selejan-Gutan, PhD, is Professor of Constitutional Law and Human Rights Law at the Faculty of Law, 'Lucian Blaga' University of Sibiu.