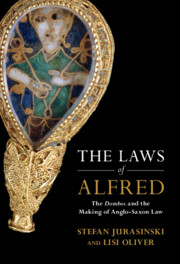 CUP has published a new book on Alfred the Great's domboc ('book of laws'), including a new translation.

Alfred the Great's domboc ('book of laws') is the longest and most ambitious legal text of the Anglo-Saxon period. Alfred places his own laws, dealing with everything from sanctuary to feuding to the theft of bees, between a lengthy translation of legal passages from the Bible and the legislation of the West-Saxon King Ine (r. 688–726), which rival his own in length and scope. This book is the first critical edition of the domboc published in over a century, as well as a new translation. Five introductory chapters offer fresh insights into the laws of Alfred and Ine, considering their backgrounds, their relationship to early medieval legal culture, their manuscript evidence and their reception in later centuries. Rather than a haphazard accumulation of ordinances, the domboc is shown to issue from deep reflection on the nature of law itself, whose effects would permanently alter the development of early English legislation.

Stefan Jurasinski, State University College, Brockport, New York
Stefan Jurasinski is Professor of English at State University College, Brockport, New York. He is the author of The Old English Penitentials and Anglo-Saxon Law (Cambridge, 2015) and, with R. D. Fulk, The Old English Canons of Theodore (2012). With Andrew Rabin, he edited Languages of the Law in Early Medieval England: Essays in Memory of Lisi Oliver.

1. The emergence of written law in early England

3. Reshaping tradition: oaths, ordeals, and the 'innovations' of the domboc

4. The transmission of the domboc: old English manuscripts and other early witnesses

8. The laws of Alfred

Appendix I: handlist of prior editions