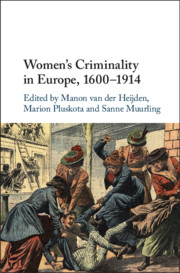 CUP is publishing an edited collection on women’s criminality in Europe.

Bringing together the most current research on the relationship between crime and gender in the West between 1600 and 1914, this authoritative volume places female criminality within its everyday context. It reveals how their socio-economic and cultural contexts provided women with 'agency' against a range of European backdrops, despite a fundamentally patriarchal criminal justice system, and includes in-depth analysis of original sources to show how changing living standards, employment, schooling and welfare arrangements had a direct impact on the quality of life of working class women, their risk of becoming involved in crime, and the likelihood of being prosecuted for it. Rather than treating women's criminality as always exceptional, this study draws out the similarities between female and male criminality, demonstrating how an understanding of specific cultural and socio-economic contexts is essential to explain female criminality, both why their criminal patterns changed, and how their crimes were represented by contemporaries.

Manon van der Heijden is Professor of Comparative Urban History at Universiteit Leiden. Her research interests include crime and justice, marriage and the family, urban finances and public services. In 2012, she was granted a NWO VICI project Crime and Gender 1600–1900. She is a member of the Academia Europaea and author of Women and Crime in Early Modern Holland (2016).

Marion Pluskota is Assistant Professor in Social History at Universiteit Leiden. She has published extensively on prostitution and criminality in the eighteenth and nineteenth centuries. She is the author of Prostitution and Social Control in Eighteenth-Century Port (2015).

Sanne Muurling recently completed her Ph.D. at Universiteit Leiden with a dissertation on everyday crime and gender in early modern Bologna, Italy. Her research focuses on the social history of everyday life, including crime and deviance, single motherhood, welfare institutions, poverty and living culture.

2. Explaining crime and gender in Europe between 1600 and 1900 Manon van der Heijden

Part I. Violence, Space and Gender:

3. Women, violence and the uses of justice before the Criminal Court of early modern Bologna Sanne Muurling

6. 'Find the lady': tracing and describing the incarcerated female population of London in 1881 Lucy Williams and Barry Godfrey