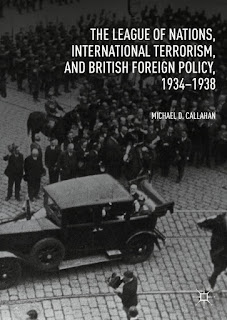 This book examines the League of Nations, state-supported terrorism, and British foreign policy after the rise of Hitler in the 1930s.  It argues that with strong leadership from Britain and France, the League made it possible for states to preserve the peace of Europe after terrorists aided by Italy and Hungary killed the King of Yugoslavia in 1934.  This achievement represents the League at its most effective and demonstrates that the organization could carry out its peacekeeping functions.  The League also made it possible to draft two international conventions to suppress and punish acts of terrorism.  While both conventions were examples of productive collaboration, in the end, few governments supported the League’s anti-terrorism project in itself.  Still, for Britain, Geneva served the cause of peace by helping states to settle their differences by mediation and concession while promoting international cooperation, a central conviction of British “appeasement” policy in the 1930s.

More information and table of contents with the publisher.

Posted by Stefano Cattelan at 11:42 AM