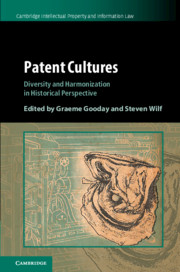 Cambridge University Press has published a book on the history of different patent systems.

This book explores how dissimilar patent systems remain distinctive despite international efforts towards harmonization. The dominant historical account describes harmonization as ever-growing, with familiar milestones such as the Paris Convention (1883), the World Intellectual Property Organization's founding (1967), and the formation of current global institutions of patent governance. Yet throughout the modern period, countries fashioned their own mechanisms for fostering technological invention. Notwithstanding the harmonization project, diversity in patent cultures remains stubbornly persistent. No single comprehensive volume describes the comparative historical development of patent practices. Patent Cultures: Diversity and Harmonization in Historical Perspective seeks to fill this gap. Tracing national patenting from imperial expansion in the early nineteenth century to our time, this work asks fundamental questions about the limits of globalization, innovation's cultural dimension, and how historical context shapes patent policy. It is essential reading for anyone seeking to understand the contested role of patents in the modern world.

Graeme Gooday is Professor of the History of Science and Technology in the University of Leeds' School of Philosophy, Religion and History of Science. From 2007–10 he led the AHRC-funded project Owning and Disowning Invention, which produced the prize-winning Patently Contestable (2013) with co-author Stathis Arapostathis. He was also co-leader with Claire L. Jones of the international research network Rethinking Patent Cultures (2014), the first workshop of which generated this volume.

Steven Wilf is the Anthony J. Smits Professor of Global Commerce at the University of Connecticut Law School where he founded the Intellectual Property program. He has served as Microsoft Fellow at Princeton University and Abraham L. Kaminstein Scholar in Residence at the United States Copyright Office. He is the author of The Law before the Law (2008), Law's Imagined Republic: Popular Politics and Criminal Justice in Revolutionary America (Cambridge, 2010), and numerous articles.

1. Diversity versus harmonization in patent history: an overview Graeme Gooday and Steven Wilf

2. The 1883 Paris Convention and the impossible unification of industrial property Gabriel Galvez-Behar

3. One for all? The American patent system and harmonization of international intellectual property laws Zorina Khan

4. US patent models as specimen and specification Courtney Fullilove

7. The Italian patent system during the long nineteenth century: from privileges to property rights in a latecomer industrializing country Alessandro Nuvolari and Michelangelo Vasta

8. Industrial 'property', law, and the politics of invention in Greece, 1900–1940 Stathis Arapostathis

10. The struggle over 'the social function of intellectual work in the economy of nations': engineers, patent law, and enterprise inventions in Germany and their European significance Karl Hall

12. Patent debates on invention from Tsarist Russia to the Soviet Union Karl Hall

13. Patent policy in India under the British Raj: a bittersweet story of empire and innovation Rajesh Sagar

15. The life and times of patent no. 2,670: industrial property and public knowledge in early twentieth-century Japan Kjell Ericson