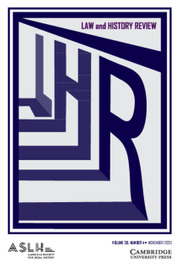 The Law and History Review has recently published its latest issue for 2020. Here the table of contents:

The Limits of the Law in Claiming Rights to Land in a Settler Colony: South Australia in the Early-to-Mid Nineteenth Century

“The Citizen Complains”: Federal Compensation for Property Lost in the War of 1812

The Strange Career of Gross Indecency: Race, Sex, and Law in Colonial Singapore

“The Work of Some Irresponsible Women”: Jurors, Ghosts, and Embracery in the Irish Free State

Trial without Jury in Guam, USA

“South Africa is the Mississippi of the world”: Anti-Apartheid Activism through Domestic Civil Rights Law

reviewed by Sarah B. White 911

Law and the Imagination in Medieval Wales—Robin Chapman Stacey

Juries in Ireland: Laypersons and Law in the Long Nineteenth Century—Niamh Howlin

Frontiers of Citizenship: A Black and Indigenous History of Postcolonial Brazil—Yuko Miki

Afghanistan Rising: Islamic Law and Statecraft between the Ottoman and British Empires—Faiz Ahmed

Liberalism as Utopia: The Rise and Fall of Legal Rule in Post-Colonial Mexico, 1820-1900—Timo Schaefer

Copyrighting God: Ownership of the Sacred in American Religion—Andrew Ventimiglia

One Hundred Years of Struggle: The History of Women and the Vote in Canada—Joan Sangster