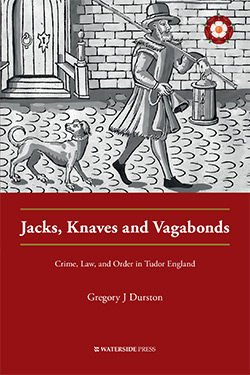 In this welcome addition to his Crime History Series, Gregory Durston points to the lack of design and short-term expediency that typified Tudor law and order. But he also detects an emergent criminal justice system amidst royal patronage, protection, and the influence of wealthy magnates. Students of English history will have heard how benefit of clergy and the ‘neck verse’ might avoid a hanging, but what of other stratagems such as down-valuing stolen goods, cruentation, chance medley, pious perjury or John at Death (a non-existent culprit blamed by the accused and treated by juries as real); all devices used to mitigate the all-pervading death-for-felony rule. Together with other artifices deployed by courts to circumvent black-letter law the author also describes how poor, marginalised and illiterate citizens were those most likely to suffer unfairness, injustice and draconian punishment. He also describes the political intrigue and widescale corruption that were symptomatic of the era, alongside such diverse aspects as forfeiture of property, evidential ploys, the rise of the highwayman, religious persecution, witchcraft and infanticide crazes. At a time of shifting allegiances — and as Crown, church, judges, magistrates and officials wrestled over jurisdiction, central or local control, ‘ungodly customs’, laws of convenience or malleable definitions — never perhaps were facts or law so expertly engineered to justify or defend often curious outcomes.

Gregory J Durston is a barrister-at-law who has taught in law schools in England and Japan. He was for many years Reader in Law at Kingston University, Surrey and is currently an adjunct professor at Southern Cross University School of Law and Justice, New South Wales, Australia. He is the author of Fields, Fens and Felonies and Whores and Highwaymen (both Waterside Press).

Posted by Stefano Cattelan at 11:22 AM