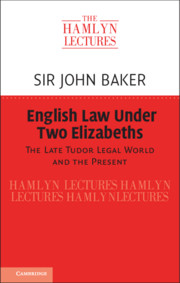 CUP is publishing a comparative legal history of English Law under the two Elizabeths.

Comparative legal history is generally understood to involve the comparison of legal systems in different countries. This is an experiment in a different kind of comparison. The legal world of the first Elizabethans is separated from that of today by nearly half a millennium. But the past is not a wholly different country. The common law is still, in an organic sense, the same common law as it was in Tudor times and Parliament is legally the same Parliament. The concerns of Tudor lawyers turn out to resonate with those of the present and this book concentrates on three of them: access to justice, in terms of both cost and public awareness; the respective roles of common law and legislation; and the means of protecting the rule of law through the courts. Central to the story is the development of judicial review in the time of Elizabeth I.

I. The English Legal System under Elizabeth I

3. An Age of Common Law and an Age of Statute?

5. Comparing Then and Now.