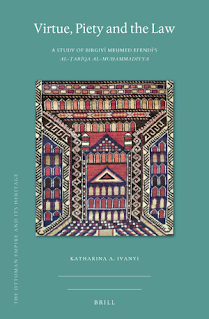 Series: The Ottoman Empire and its Heritage, Volume: 72

In Virtue, Piety and the Law Katharina Ivanyi examines Birgivī Meḥmed Efendī’s (d. 981/1573) al-Ṭarīqa al-muḥammadiyya, a major work of pietist exhortation and advice, composed by the sixteenth-century Ottoman jurist, Ḥadīth scholar and grammarian, who would articulate a style of religiosity that had considerable reformist appeal into modern times. Linking the cultivation of individual virtue to questions of wider political, social and economic concern, Birgivī played a significant role in the negotiation and articulation of early modern Ottoman Ḥanafī piety. Birgivī’s deep mistrust of the passions of the human soul led him to prescribe a regime of self-surveillance and control that was only matched in rigor by his likewise exacting interpretation of the law in matters of everyday life, as much as in state practices, such as the cash waqf, Ottoman land tenure and taxation.

Katharina A. Ivanyi, Ph.D. (2012), Princeton University, is External Lecturer at the Department of Near Eastern Studies at the University of Vienna.

Note on Transliteration and Transcription

3 Context III: the Bigger Picture—Early Modern Sunnitization, the Negotiation of Orthodoxy and the Pietist Turn

1 The Ḥanafī Tradition—Law and Ethics

5 The Corruption of Times

6 Legal Sources beyond the Ḥanafī School

10 Science of the Hearts

12 Emulation of the Prophet

3 The Fundamentals of Piety: an Overview of the Structure and Contents of al-Ṭarīqa al-muḥammadiyya

3 General Structure of TM and Overview of Contents

9 The Legal Status of the various sciences

11 The Practical Manifestations of Piety—the Core of TM

12 The Vices of the Heart

13 Birgivī’s Conception of the Soul

14 The Vices of the Tongue

17 The Vices of the Hand

18 The Vices of the Belly

19 The Vices of the Private Parts

21 Vices Unspecified by Any One Part of the Body

24 What Holds It All Together

4 The Slippery Slope of Piety: Birgivī on Sincerity, Sanctimony and How to Determine Right Intention

2 Vocabulary and Semantics, Definitions and Classifications

4 Other Types of Dissimulation

10 The “People of Religion”

11 When Things Are Not That Clear-Cut

13 How to Cure the Evil of riyāʾ

14 Display in Order to Guide, but How Can You Be Sure

5 The Economics of Piety: Birgivī on Wastefulness, the Cash waqf and Ottoman Land Tenure and Taxation

4 The Causes, Manifestations and Antidotes of Wastefulness

Posted by Stefano Cattelan at 11:19 AM