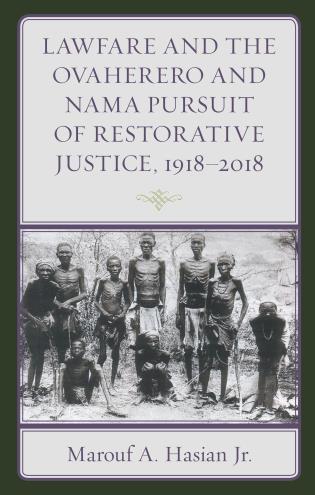 This book provides readers with a critical analysis of the restorative justice efforts of the Ovaherero and Nama communities in Namibia, who contend that they should receive reparations for what happened to their ancestors during, and after the 1904–1908 German-Ovaherero/Nama war. Arguing that indigenous communities who once lived in a German colony called “German South West Africa” suffered from a genocide that could be compared to the World War II Holocaust Namibian activists sued Germany and German corporations in U.S. federal courts for reparations. The author of this book uses a critical genealogical approach to all of this “lawfare” (the politicizing of the law) in order to illustrate some of the historical origins of this quest for social justice. Portions of the book also explain some of the historical and contemporary realpolitik barriers that stood in the way of Ovaherero and Nama activists who were asking for acknowledgments of the “Namibian genocide,” apologies from German officials, repatriation of human remains from colonial times as well as restitution that might help with land redistribution in today’s Namibia. This book shows many of the difficulties that confront those indigenous communities who ask twenty-first century audiences to pay restitution for large-scale colonial massacres or imperial genocides that might have taken place more than a hundred years ago.

Marouf Hasian Jr. is full professor in the department of communication at the University of Utah.

3. The German Social Democrats’ Anti-Imperialist Rhetorics and the Promotion of “Native” Rights During the Reichstag Debates, 1904-1913

4. “Little Heaps of Sand” and the Transcontinental Debates About the Evidentiary Nature of the 1918 British Blue Book

8. Realpolitik Entanglements of Namibian-German Relationships and the Dingpolitik of Ovaherero and Nama Remains

9. The 2017 Ovaherero and Nama Reparations Lawsuit

10. Contemplating the Future of Lawfare in Contests over Namibian Claims for Restorative Justice