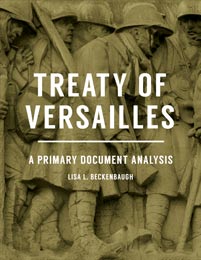 
An indispensable resource on the Treaty of Versailles, one of the most influential and controversial documents in history, this book explains how the treaty tried to solve the complex issues that emerged from the destruction of World War I. This carefully curated primary source collection includes roughly 60 documents related to the signing of the Treaty of Versailles. By collecting all of the most significant documents in one volume, it allows readers to hear the original arguments surrounding the treaty and to explore the voices of the people involved at the Paris Peace Conference. Moreover, it allows readers to engage with the documents so as to better understand the complex motivations and issues coming out of World War I and highlights the differences between the victors and identifies the problems many countries had with the treaty before it was even signed. The documents are organized in chronological order, providing a blueprint to help students to understand all of the significant events that led to the treaty, as well as the vast repercussions of the treaty itself. In addition to the Treaty of Versailles itself, documents include such significant primary sources as the Sykes-Picot Agreement, the Balfour Declaration, the Treaty of Brest-Litovsk, President Woodrow Wilson's Fourteen Points, and Germany's response to the treaty.


Lisa L. Beckenbaugh, PhD, is assistant professor of military and security studies at Air University's Air Command and Staff College. She received her MA from St. Cloud State University and her PhD from the University of Arkansas. Dr. Beckenbaugh has taught at a variety of undergraduate and graduate civilian institutions. She also served as the interim project lead and military analyst II for the Operational Leadership Experiences Project under the aegis of the Combat Studies Institute at Fort Leavenworth and was a Post-Graduate Historical Research Fellow at the Defense POW/Missing Personnel Office.