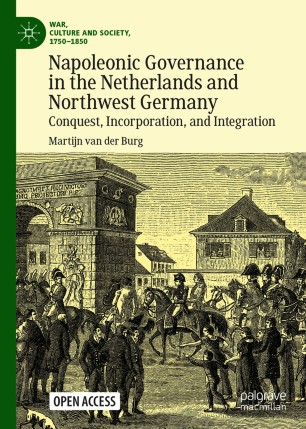 “Van der Burg presents an innovative transregional study of Napoleonic governance in the often-overlooked northern periphery of the Empire. This book carefully examines the Empire’s administrative structure in the north, focusing on the heterogeneous community of prefects and subprefects as ‘tools of incorporation’, binding the regions to the central state. His rich comparative analysis highlights the incomplete integration of the north and makes important contributions to our understanding of the Empire and its legacy of state building.”

—Katherine Aaslestad, West Virginia University, Morgantown, USA
“Martijn van der Burg makes a vital contribution to the burgeoning scholarly literature on Napoleonic Europe in this well researched, carefully constructed volume. His analysis of this somewhat neglected, but important, part of Napoleon’s hegemony will become essential reading for all students and specialists of Napoleonic Europe. Van der Burg brings the riches of recent Dutch and German scholarship on the Napoleonic period, hitherto denied to an Anglophone readership, to say nothing of his own insight into Napoleonic rule in these complex regions. He delineates the course of Napoleonic rule here with clarity and acute attention to detail. This is a worthy addition to the Napoleonic renaissance in historiography.”
—Michael Broers, University of Oxford, UK
“A thorough, transparent and important comparative study into the content, dynamics, limits and results of Napoleonic governance, and the role of the (sub)prefects here within, in the Netherlands and Northwest Germany. Original, well-written and a very welcome contribution to the historiography of these still understudied areas in the Napoleonic years, as well as to Napoleonic historiography in general.”
—Johan Joor, International Institute of Social History, Amsterdam, the Netherlands
This open access Palgrave Pivot explores the ways in which French Emperor Napoleon tried to integrate the present-day Netherlands and Northwest Germany into his Empire, by replacing traditional institutions and governing practices with French ones ('Napoleonic governance'). The northern periphery of the Napoleonic Empire continues to be overlooked by the bulk of historians; this study shows that a transregional approach can yield important findings. In a broader sense, the study does not deal with these regions alone, but also with the difficulties that are inherent to European integration.

Martijn van der Burg is Assistant Professor at the Open University of the Netherlands.

Posted by Frederik Dhondt at 11:00 AM