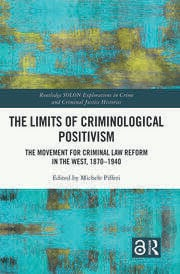 The Limits of Criminological Positivism: The Movement for Criminal Law Reform in the West, 1870-1940 presents the first major study of the limits of criminological positivism in the West and establishes the subject as a field of interest.

The volume will explore those limits and bring to life the resulting doctrinal, procedural, and institutional compromises of the early twentieth century that might be said to have defined modern criminal justice administration. The book examines the topic not only in North America and western Europe, with essays on Italy, Germany, France, Spain, the United Kingdom, Belgium, and Finland but also the reception and implementation of positivist ideas in Brazil. In doing so, it explores three comparative elements: (1) the differing national experiences within the civil law world; (2) differences and similarities between civil law and common law regimes; and (3) some differences between the two leading common-law countries. It interrogates many key aspects of current penal systems, such as the impact of extra-legal scientific knowledge on criminal law, preventive detention, the ‘dual-track’ system with both traditional punishment and novel measures of security, the assessment of offenders’ dangerousness, juvenile justice, and the indeterminate sentence. As a result, this study contributes to a critical understanding of some inherent contradictions characterizing criminal justice in contemporary western societies. Written in a straight-forward and direct manner, this volume will be of great interest to academics and students researching historical criminology, philosophy, political science, and legal history.

Michele Pifferi is Professor of Legal History at the University of Ferrara, Law Department. He has been Visiting Researcher at the Max-Planck-Institute for Legal History and Legal Theory in Frankfurt am Main; Emil Noël Fellow at NYU School of Law; Robbins Fellow at Berkeley UC—School of Law; Academic Visitor at the Oxford Centre for Criminology; and Alexander von Humboldt Research Fellow at the University of Hamburg, Faculty of Law. He is currently Alexander von Humboldt Research Fellow at the Humboldt Universität zu Berlin, Faculty of Law as well Principal Investigator of a research project on Legal History and Mass Migration: Integration, Exclusion, and Criminalization of Migrants in the 19th and 20th Century. Member of the Editorial Board of the series Rechtsgeschichte und Rechtsgeschehen —Italien (LIT Verlag), and of Quaderni fiorentini per la storia del pensiero giuridico moderno. His research interests focus on history of late medieval to late modern criminal justice, history of criminology, and history of migration law.

The Influence of Positivism in Belgium: An Eclectic Compromise Between Adhesion and Resistance

The Limits of Positivism: Finnish Criminal Law Scholarship and the European Context at the Turn of the Twentieth Century

Responding to the Problem of Crime: English Criminal Law and the Limits of Positivism, 1870-1940

Positivism’s Humbugs: Criminology and its Cranks in Progressive America

From Responsibility to Dangerousness? The Failed Promise of Penal Positivism

Posted by Stefano Cattelan at 8:48 AM