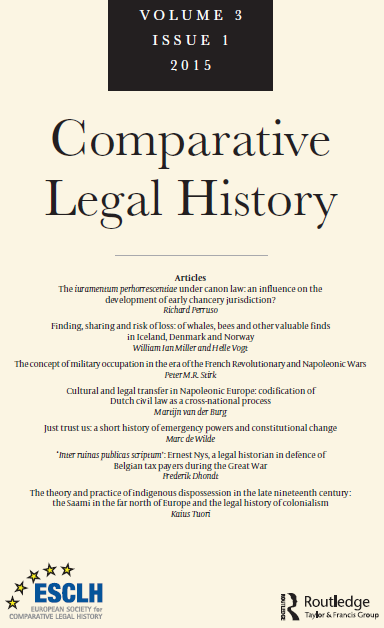 Between the Lion Cub of Judea and the British Lion: cause lawyers, British rule and national struggle in Mandatory Palestine (Shimon-Erez Blum)
Abstract:


The tempestuous political environment of the final days of British Mandate rule in Palestine saw intensive activity by cause lawyers. As a test case of this activity, this article examines the conduct of the attorneys who handled the case of Dov Gruner, a member of the Irgun Zionist underground. In April 1946, Gruner was sentenced to death by a British military court. Informed by cause lawyering paradigm, the article examines the tactics used by his lawyers and their relations with players within and outside the court. This examination sheds light on the links between nationality, the law and lawyers at that time in Palestine. In particular, the analysis highlights the key role played by the lawyers in the Gruner affair, similar from that perspective to the dominant role of lawyers in the Irish War of Independence and different from the relatively marginal role played by lawyers in Indian freedom struggle.

Do you know the ninth commandment? Tensions of the oath in Dutch colonial Sri Lanka (Nadeera Rupesinghe)
Abstract:


Colonial agents often saw the value of improvising the corporal form of the oath for the smoother functioning of judicial bodies. In eighteenth-century Sri Lanka, the Dutch colonial government found that potential swearers were mostly nominal Christians who had few scruples about giving false oaths. This subtle resistance prompted the Dutch to make changes to accommodate local customs. Ultimately, the changes were of little use due to the mutual discrediting of potential oath-takers. A nominal Christian’s refusal to take the Dutch oath and preference for the local oath would be criticized, as also an acceptance of the Dutch form. Plural forms of the oath thus did not always provide the desired effect but rebounded in unexpected ways. This article argues that the study of mundane everyday judicial practice is needed to gain deeper insights into the functioning of pluralistic and colonial law.


The ESCLH will celebrate the 10th anniversary of its foundation in the Hague on 5 December 2019. The following pages describe and reflect on the contribution of the ESCLH to comparative legal history, analysing the past and the present, while looking to the future, before concluding with some final considerations on what I call the ‘Spirit’ of the ESCLH.


More information with Routledge.
Posted by Frederik Dhondt at 12:29 PM