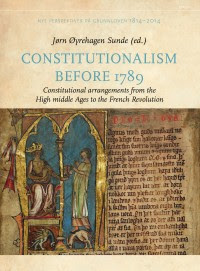 The great era of constitutionalism spans from the French revolution of July 1789 to the octroyed French constitution of June 1814. Yet, the European constitutional mechanisms and way of reasoning can be traced much further back. This project displays the need to expand, restrain and at the same time legitimise state power from the 12th century and beyond the great era of constitutionalism in order to demonstrate its historical reach.
The Church was an early example of a state-like and centralised power, and thus contributed greatly to the development of a state organised Europe. This project examines the Church as a driving force behind constitutional reasoning and as a developer of constitutional practice throughout the Middle Ages. Feudal law, with its contractual based system of rights and duties, could regulate society on several levels and thus was another source for constitutional reasoning and practices.
Constitutional reasoning and practices developed in varied places such as the city-states of Flanders, the kingdoms of Norway and England, and the Iberian Peninsula. They continuously influenced state formation and politics in countries such as the Scandinavian kingdoms, as well as being the object of scholarly studies in Scotland, Germany and France. As a result, philosophers of the Enlightenment and the revolutionary movements could draw on a multitude of practices and theories during the 18th century.

Posted by Frederik Dhondt at 4:01 PM