BOOK: "Law and Custom in Korea", by Marie Seong-hak Kim 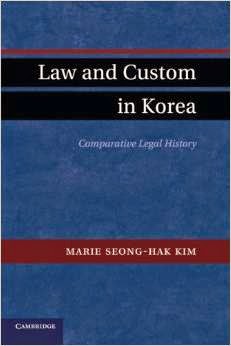 This book sets forth the evolution of Korea's law and legal system from the Chosǒn dynasty through the colonial and postcolonial modern periods. This is the first book in English that comprehensively studies Korean legal history in comparison with European legal history, with particular emphasis on customary law. Korea's passage to Romano-German civil law under Japanese rule marked a drastic departure from its indigenous legal tradition. The transplantation of modern civil law in Korea was facilitated by Japanese colonial jurists who themselves created a Korean customary law; this constructed customary law served as an intermediary regime between tradition and the demands of modern law. The transformation of Korean law by the brisk forces of Westernization points to new interpretations of colonial history and it presents an intriguing case for investigating the spread of law on the global level. In-depth discussions of French customary law and Japanese legal history in this book provide a solid conceptual framework suitable for comparing European and East Asian legal traditions.
Posted by Unknown at 10:27 AM