PUBLICATION: The Limits of Empire 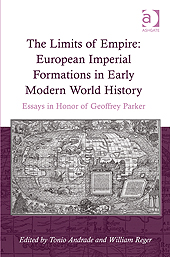 
This volume, published in honor of historian Geoffrey Parker, explores the working of European empires in a global perspective, focusing on one of the most important themes of Parker’s work: the limits of empire, which is to say, the centrifugal forces – sacral, dynastic, military, diplomatic, geographical, informational – that plagued imperial formations in the early modern period (1500–1800). During this time of wrenching technological, demographic, climatic, and economic change, empires had to struggle with new religious movements, incipient nationalisms, new sea routes, new military technologies, and an evolving state system with complex new rules of diplomacy.

Engaging with a host of current debates, the chapters in this book break away from conventional historical conceptions of empire as an essentially western phenomenon with clear demarcation lines between the colonizer and the colonized. These are replaced here by much more fluid and subtle conceptions that highlight complex interplays between coalitions of rulers and ruled. In so doing, the volume builds upon recent work that increasingly suggests that empires simply could not exist without the consent of their imperial subjects, or at least significant groups of them. This was as true for the British Raj as it was for imperial China or Russia...
For more information click here
Posted by Dr. Stefania Gialdroni at 2:56 PM