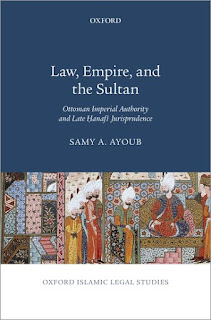 -Reconsiders fundamental premises about Ottoman sultanic authority.
-Gives a new perspective on the later development of the Hanafi school of Islamic law in the Ottoman Empire.
-Explains how legal revisions by Muslim jurists of the period were not temporary strategies but rather involved the use of built-in mechanisms to reinterpret Islamic law and keep it relevant to the changing social, political, and economic circumstances of the Ottoman Empire.
-Provides detailed analysis and fresh insights on a wide range of legal issues through careful reading of understudied sources, uncirculated manuscripts, and extensive references to authoritative Hanafi texts.

Posted by Antoni Lahondès at 3:07 PM