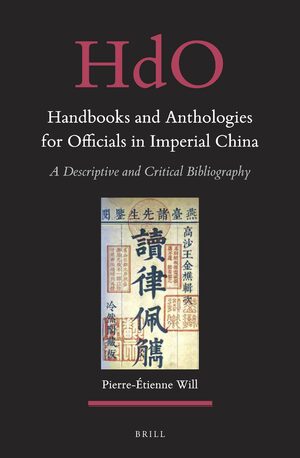 Brill is publishing a new book on sources of Song, Ming, and Qing administrative Chinese law.

The 1,165 entries of Handbooks and Anthologies for Officials in Imperial China by Pierre-Étienne Will and collaborators provide a descriptive list of extant manuscript and printed works—mainly from the Song, Ming, and Qing dynasties—created with the aim to instruct officials and other administrators of imperial China about the technical and ethical aspects of government, and to provide tools and guides to help with the relevant procedures. Both generalist and specialized texts are considered. Among the latter, such disciplines as the administration of justice, famine relief, and the military receive particular attention. Each entry includes the publishing history of the work considered (including modern editions), an analysis of contents, and a biographical sketch of the author.

Pierre-Étienne Will, Ph.D. (1975), EHESS, is Professor Emeritus of modern Chinese history at Collège de France. He has published extensively on the socio-economic history of late-imperial and early-Republican China, including Bureaucracy and Famine in Eighteenth- Century China (Stanford, 1990).